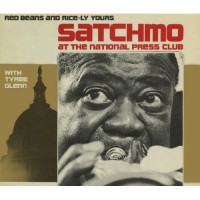 Title: Satchmo at the National Press Club: Red Beans and Rice-ly Yours

Arguably the most influential jazz musician in history and certainly one of the music’s founding fathers, the world shall be forever indebted to the musical genius of Louis “Satchmo” Armstrong. Indeed, the circumstances which induced young Armstrong to first pick up the cornet in the unlikely setting of New Orleans slums was nothing short of divine providence— surely a boon from the powers that be bestowed upon the underserving ears of us mere mortals. And as if his immeasurable contributions to the genre weren’t enough, Louis continues to thrill and entertain us even beyond the grave, as demonstrated in the recently released recording of the jazz icon’s 1971 performance at the National Press Club in Washington D.C.

Entitled Red Beans and Rice-ly Yours, the album’s name not only makes reference to the phrase to which Armstrong playfully signed letters, but also to the culinary trappings which accompany the tracks. Thirty-seven recipes on Creole and Cajun cuisine—ranging from cocktails to jambalaya— may be found in the album’s liner notes, many of which are said to be personal, favorites of the jazz legend (follow this link for a downloadable copy). Just in time for July 4th picnics and barbeques, these recipes along with their musical counterparts offer a patriotic way to appreciate the diverse nature of American culture. What better way to celebrate our country’s independence than to listen to a music born and bred in American soil while feasting on the type of food unique to this great country?

While the delectable dishes outlined in the aforementioned recipes could certainly satiate a hungry stomach, the album’s music also serves to satisfy the body’s more refined appetites. Savory melodies, ripe rhythms, mouth-watering solos, gooey ballads, zesty vocals, scrumptious harmonies, all topped with a bit of gourmet swing will feed any listener’s famished soul. The first half of the recording features Louis Armstrong both on vocals and trumpet while only Armstrong’s long-time band mates, Tyree Glen and Tommy Gwaltney, appear in the latter half of the album. Armstrong had been struggling with illness and was instructed by his doctor to sing for only ten minutes and abstain entirely from his trumpet playing for the concert at the National Press Club. However, Armstrong could not help but entertain to his fullest capacity and ended up performing for over twenty-five minutes; singing, playing, and scatting to his heart’s content. The performance, recorded five months prior to his death, captures Armstrong’s very last trumpet performance and serves as a testament to his unwavering love for jazz.

Of notable mention is the never before recorded track, “Boy From New Orleans,” Armstrong’s endearing and playful musical autobiography, set to the quintessential New Orleans tune: “When the Saints Go Marching In.”  The CD also features such Armstrong classics as “Hello Dolly” and “Mack the Knife” sung in that unmistakable voice made of gravel and grit. And while the second half of the recording is sadly Louis-less, the impressive efforts of Tyree Glen (on trombone) and Tommy Gwaltney (on vibes and clarinet) serve as a spectacular tribute to their absent friend and fellow musician. In fact, the shining star of the entire album is trombonist Tyree Glen’s recording of the Duke Ellington standard, “Mood Indigo.” The track shows the astounding prowess cultivated by Glen with his gentle crooning and gorgeous phrasing, made all the more impressive by the fact that it is produced through his entirely unsubtle horn.

Unlike the album’s illustrious namesake, Satchmo at the National Press Club: Red Beans and Rice-ly Yours is a treasure not to be missed!