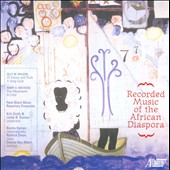 Title: Recordings from the African Diaspora

Recordings from the African Diaspora includes two works composed by the noted African American composers Mary D. Watkins and Olly W. Wilson, performed by the New Black Music Repertory Ensemble. Both were commissioned—Five Movements in Color in 1993 by the Camellia Symphony Orchestra and Of Visions and Truth: A Song Cycle in 1989 by the Center for Black Music Research for the Black Music Repertory Ensemble—and are modern representations of African Diasporic musical elements presented within a sonically orchestral musical setting.

Five Movements in Color, by Mary D. Watkins, is an instrumental piece consisting of individual movements that create slightly different sonic atmospheres utilizing strings, mixed percussion, xylophone, woodwinds, piano and brass. One of the most common musical elements within this particular work is the introduction of small gestures in a fashion that creates conversations between instruments within the piece.  The first movement, “Once Upon a Time” specifically quotes African musical elements through the use of African drums and polyrhythmic layering within the mixed percussion. “Soul of Remembrance” sheds light on a different aspect, creating a sonic image of a march that could be attributed to civil disobedience marches or simply to the struggle of African Americans within America. This element is created through a slower paced presentation, where strings serve as the dominant instrument supported mainly in climax by brass instruments.  This climax immediately fades into a more solemn atmosphere initially introduced in the beginning of the movement.  The third movement, as indicated by its title “Playful Jazzy”, showcases jazz influences most obviously through jazz founded rhythmic combinations as well as what can be perceived as improvised trumpet solos. “Slow Burn” returns to a slower paced representation with the reintroduction of the African drum.  It is in this particular movement that the instrument palette is enhanced with the introduction of flugelhorn, piano, and harp creating a sonic environment that can not only be perceived as African influenced, but can also make connections to other cultures as well.  The last movement, “Drive By Runner,” reintroduces the strings as a prominent instrument with other woodwinds entering in a supportive manner.  The element of gestural, musical conversation between instruments, returns here as a more obvious and prominent compositional decision, specifically as a tool to generate climax within the piece.

In contrast to Watkin’s composition, Olly Wilson’s Of Visions and Truth: A Song Cycle is primarily vocally driven.  This work consists of four songs—“I’ve Been ‘Buked,” “Mama’s Little Brown Baby,” “Ikef” (a setting of Henry Dumas’ poem of the same name), and “If We Must Die”—separated by two instrumental interludes.  Interlude I is more striking, utilizing horns, strings, and percussion in order to emphasize attacks and rhythmic pulses while Interlude II is slower with an elongated melody.  The first movement of the piece is a contemporary setting of the spiritual “I’ve Been ‘Buked,” featuring an elongation of the melodic contour of the original spiritual as well as the placement and displacement of pieces of the melody and verses of the song amongst instrumental accompaniment. “Lullaby” makes use of non-lexical vocables followed by the singing of the lullaby “Mama’s Little Brown Baby,” evolving over sparse instrumental accompaniment. “Ikef,”  like Watkins’ “Playful Jazzy,” incorporates some jazz influenced rhythmic elements presented alongside the quotation of the plantation song “Shortenin’ Bread.”  The voice is the driving force of this movement, placed in a manner that allows for the perception of the voice leading the instrumental accompaniment.  Following “Interlude II” is the final movement, “If We Must Die,” which incorporates the conversational element between instrumentals with accents by piano and strings.  This movement is metrically flexible with sharp and instrumental entrances leading to the climactic moment in which the vocals layer the last two lines of the piece in two different vocal registers, presented with two different rhythmic patterns.  This climactic point is reached with the settling of these two vocal registers in harmony, followed by the proclamation “If We Must Die,” and concluding with a horn and percussion attack.

Recorded Music of the African Diaspora brings together two representations of musical elements influenced and presented in an orchestral medium, composed by two African American composers.  Bringing together African, African American as well as European musical elements is successfully executed in this representation of recorded music of the African Diaspora.