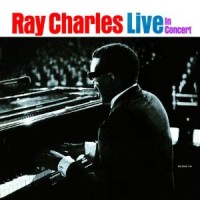 Concord’s new Ray Charles: Live in Concert is a magnficent CD, a jumping disc with all the songs from the original chartbusting 1964 LP, plus, thanks to digital technology, five well-chosen bonus tracks. For funky blues and jazzy jazz, for a singer in glorious voice and a big band in its prime, and for belly laughs and broken hearts, you just can’t beat this album.

In the fall of 1964, Ray Charles reigned as a pop music superstar. He’d scored with enormous hits three of the past four years: “Georgia on My Mind” in ’60, “Hit the Road, Jack” in ’61, and biggest of all, “I Can’t Stop Loving You,” in ’62. The money was pouring in. He bought land in LA to build his own offices and studio, and he bought his own plane to fly himself and his eighteen-piece band to increasingly classy gigs.

Like his gig Sunday September 20 at the Shrine, a 6000-seat barn of a place in LA that also hosted circuses, basketball games, and the Academy Awards. Someone in Ray’s organization—the liner notes say it was manager Joe Adams, but I suspect Ray himself–decided to record the show; maybe he could get an album out of it as popular as ‘59’s Ray Charles in Person. Sid Feller, then Ray’s producer at ABC-Paramount, flew out from New York, and Adams booked LA’s premier recording engineer, Wally Heider, to set up the mikes and get it all on tape. Ray Charles: Live in Concert is the dynamic result.

After fanfare opening, the band jumps into a Basie-esque “Swing a Little Taste,” Ray taking six wild piano choruses for himself, then they slip into a mellow “One Mint Julep” that gets the crowd singing along. Next up, Ray’s breakthrough ’55 hit, “I Got A Woman,” which he introduces with a flip few bars of Beethoven’s “Fur Elise.”

That night Ray called “Georgia” off at what the band called, “Ray’s death tempo,” a beat so slow and laid back that, as baritone saxist Leroy Cooper told me, “There was no way to count to keep your place. If you counted, you’d always end up ahead of him, which he hated! To catch Ray’s feeling you had to watch him, not take your eys off him, his left foot, his shoulders, his hands.” Somehow the band’s restraint builds an agonizing tension that builds to a climax, then bursts.

From there the hits just keep rolling: “You Don’t Know Me,” “Hallelujah I Love Her So,” “Busted.” Listening, I thought again and again: what other pop musician ever sang, played piano, and led his own big band, knowing the arangements down to the last sixteenth note? Nobody else but Ray comes to  mind. Great as they were, Frank Sinatra never played an instrument, and Duke Ellington and Count Basie never sang. Ray was and remains unique in the totality of his musicianship.

The audience, predictably, goes nuts at the “What’d I Say” finale, followed by a raucous “Pop Goes the Weasel.” Earlier in the show Ray had, more subtly, held the crowd in the palm of his hand with his voice, piano, and hushed rhythm section on a six-minute version of “Makin Whoopee” that he added to his act as a droll comment on a current paternity suit:

I don’t make much money,
About five thousand per
And some judge who thinks he’s funny
Says I gotta give six to her!

As much as any live album I know, Ray Charles: Live in Concert takes you there. Heider’s superb recording gets Ray and the band’s every note, and it gets the running commentary from the audience, the cheers, shouts, and laughter that keep the musical excitement building. I’m one of the lucky ones who saw Ray Charles live many times over many years, and I feel I can remember each and every one. If you haven’t been so lucky, get Ray Charles: Live in Concert and you’ll taste a big gob of what you’re missing.

Editor’s Note: Michael Lydon is the author of the biography Ray Charles: Man and Music; his collection of interviews is housed at the Archives of African American Music and Culture, home of Black Grooves.