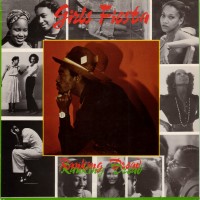 The life of Ranking Dread is a tale right out of a film noir. Whether cutting his teeth in Jamaica with the Ray Symbolic sound system while involving himself with infamous gang leader Claude Massop, or achieving widespread fame in London with the label Burning Sounds and simultaneously living a life of murder and drug dealing, or attempting to gain refugee status in Canada while at the same time allegedly slashing his girlfriend’s face with a knife. Emerging from a mysterious background where even his real name continues to be called into question, The Jamaican toaster who doubled as a criminal eventually met his fate in 1996 at the hands of another prisoner.  Or maybe it was poisoning. Whatever the reason, this Robert Johnson-esque mythology reflects our deep need to know every detail in the lives of legendary artists. While the exact background and history of Ranking Dread may be forever held in question, his talents as a brilliant lyricist and personality are undeniable—while difficult to separate a musician from real-life actions, Ranking Dread nevertheless provided a number of hits over his career to earn significant fame. Oddly enough, however, a series of his albums remain hard-to-find entities, relegated to high prices among record enthusiast websites. A gritty 1970s roots reggae concoction of Ranking Dread’s lyrical mastery with Linval Thompson’s production expertise, Girls Fiesta is one such album that has been given the proper reissue treatment. With extensive liner notes provided by reggae historian and author David Katz and beautiful remastering by Nick Robbins, Girls Fiesta is a great example of a well-deserved reissue.

Girls Fiesta is roots rhythms at its finest. Ranking Dread headed  to the UK in the 1970s after several run-ins and shootouts with Jamaican police  placed him in the top 10 most wanted criminals. Eventually finding his way to east London, he aligned himself with the Burning Sounds label. Working with the famous musician and producer Linval Thompson, Girls Fiesta provides an array of deep, heavy rhythms from Thompson himself, the majority coming from Love is the Question, released that same year. There are also a host of older rhythms, such as “I Love Marijuana” on “Marijuana Soul” and “Can’t Stop Natty Dread” on “Kilburn Lane.” Similarly, Ranking Dread gives each track its due, effortlessly toasting with a sense of familiarity and ease. There’s less of the comedic vibe Ranking Dread is known for, but the serious nature of the album is anything but a hindrance. Common roots topics are confronted in the typical style, but with a good amount of creative presentation to make it truly unique. “Poor Man,” “Natty on the Rock/Death Trap” and “Kilburn Lane” stand out as big-time hits from the album.

Girls Fiesta stands as a classic mix of strong rhythms supplemented by the abilities of Ranking Dread to put a new spin on the tracks through his one-of-a-kind toasting technique. What’s more, an extensive history of Ranking Dread, explaining cultural and historical influences of the man’s life, provides plenty of background for what made the man and the music. With a lost treasure finally restored, Girls Fiesta stands out as another deep roots reggae classic.