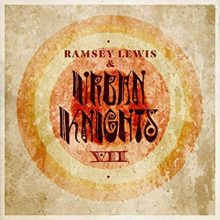 Music industry iconic figure, legendary jazz pianist, and Chicago native Ramsey Lewis has released what is possibly his final album with the Urban Knights, VII, before embarking on his journey into retirement. Since his debut album, Ramsey Lewis and his Gentle-men of Swing (1956), Lewis has been a thriving force in the music industry as a successful artist and radio personality, producing countless record albums, and hosting his Legends of Jazz radio and television series. Along the way he has received three Grammy Awards and five gold records, not to mention recordings and collaborations with major music figures such as Nancy Wilson, Maurice White, Freddie Hubbard, Grover Washington Jr., Oliver Nelson, Benny Golson, Dr. Lonnie Smith, and Tony Bennett, among many others.

This spectacular list of achievements is only the tip of the iceberg. Musically speaking, Lewis is a piano virtuoso, a prolific composer and arranger, and a truly versatile artist. With his comprehension and adeptness of musical styles across the full spectrum of black popular and religious music, Lewis’ albums always include elements of gospel, blues, jazz, R&B, funk, jazz fusion, bossa nova, samba, calypso, and Afro-Cuban genres. This poly-musical approach of Lewis’s style is certainly maintained and heard throughout his Urban Knights VII album.

VII begins with Lewis performing a solo rendition of John Coltrane’s “Dear Lord,” almost like an opening musical prayer. Moving on to a foot-stomper, he takes us down memory lane as he revisits his funky-fusion arrangement of the title track from his chart topping album Tequila Mockingbird (1977). Next is the soothing vocal stylings of Alexander over the bossa nova interpretation of Sting’s classic song, “The Shape of My Heart.” Lewis takes a moment to pay tribute to Maurice White with a soulful performance of White’s “The Rose,” which was recorded on their debut album Urban Knights I.

Lewis reprises versions of “Sharing Her Journey” and “The Spark” from Songs from the Heart: Ramsey Plays Ramsey (2009), before transitioning into a down-home blues rendition of Jimmy Reed’s “Baby What You Want Me To Do.” Other tracks include a bossa nova rendering of the Beatles’ “And I Love Her” as well as a performance of Chick Corea’s “Armando’s Rhumba.” The album culminates with Lewis’ heartfelt solo performance of his father’s most performed song, “Trees,” a tune that captures his sentiments of family.

What better way to retire than with a reflective look into one’s own past musical journey. His collaboration with the Urban Knights on VII is just that, a glimpse into the musical legacy of living legend and culture-bearer, Ramsey Lewis.