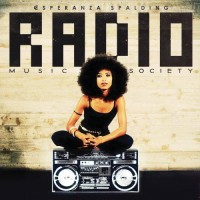 Jazz bassist, vocalist, songwriter, producer, and all-around musical Renaissance woman Esperanza Spalding’s fourth studio album, Radio Music Society, kicks off with a track about the serendipity of hearing that one perfect song on the radio, exactly when you need it most.  The song is one of those tunes that, as Spalding sings:

You can’t help singin’ along
Even though you never heard it
You keep singin’ it wrong.
This song will keep you grooving.

And, indeed, Spalding’s whole album will keep you grooving.  Her sound, an eclectic mix of contemporary jazz, soul, big band, and a healthy dose of R&B, won her a 2011 Grammy for best new artist, a rarity for a jazz performer.  While her previous release, Chamber Music Society, relied heavily on strings, jazz-inflected percussion, and scat singing, Radio Music Society is heavily lyric-driven, hook-laden, and influenced by hip hop (rapper/producer Q-Tip co-produces two tracks).  Spalding pulls from a large stable of jazz performers, including the American Music Program horn section, along with slick (but not too-slick) production to get a full, lush sound throughout the album.  The infusion of hip hop makes RMS an easier listen for those of us raised on pop and R&B but may turn off die-hard jazz aficionados, or those who are more familiar with Spalding’s earlier work.  You can hear the marriage of styles in the aforementioned track “Radio Song:”

Other standout tracks show off Spalding’s quirky voice, somewhere between Blossom Dearie’s childlike rasp, Tori Amos’s reedy chirps and sultry low tones, with a dash of the gutsiness of a young Natalie Cole.  Spalding luxuriates in the long, almost elastic vocal lines of “Cinnamon Tree” and shows off her vocal agility in “City of Roses,” co-produced by Q-Tip.  Spalding only falters when her lyrical skills don’t quite measure up to her talents as an instrumentalist and vocalist.  In the track “Vague Suspicions,” her anti-war sentiment, however well-intentioned, rings a bit hollow when she sings:

Maybe your heart is seized with passing pity for the dead
And vague suspicions creep into your head.
Am I part of war
And what is God for?
“Next on Channel 4: Celebrity gossip!”

One of the most fulfilling tracks on the album, oddly, is one that drops all but a hint of the R&B sound and casts itself back to the 1940s and 50s.  “Hold On Me,” Spalding’s ode to unrequited love, is a bluesy, sultry number, thanks to the American Music Program horns and masterful piano work by Janice Scroggins.  Sounding like an updated version of a big band era torch song, the track’s lyrical and musical sentimentality along with Spalding’s impassioned vocals make this track nearly campy, in the best sense of that word.  Radio Music Society’s diverse sounds and artful melding of styles portends a successful and genre-hopping musical future for Spalding, one that music fans, jazzers or not, would do well to watch.