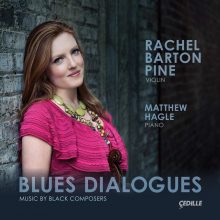 In 1997, violinist Rachel Barton Pine presented her landmark album, Violin Concertos by Black Composers of the 18th & 19th Centuries, on the Cedille Records label. Released 21 years later, Blues Dialogues is the most recent culmination of Pine’s ongoing research into music by Black composers. Going beyond the confines of Western classical music, her new project features twelve works that draw upon the African American experience and more specifically, blues idioms, which the violinist claims is her “second-favorite genre of music.” This is certainly a fitting sentiment for a Chicago native, especially one who has polished her blues chops by jamming with two local legends—Son Seals and Sugar Blue.

Accompanied by her principal recital partner, pianist Matthew Hagle, Pine opens the album with “Blues (Deliver My Soul),” written in 1968 by the late composer, legendary jazz educator and Indiana University Jacobs School of Music professor David N. Baker. In the liner notes, Pine explains how she discovered this work as a teenager and was immediately captivated by its adaptation of a classic 12-bar blues progression. Opening with a virtuosic cadenza, Pine then settles into the bluesy style with ease, while Hagle’s chord progressions reflect Baker’s roots in the Black church. Together they create a harmonious interplay between the sacred and secular.

Two more pieces from the same era follow. Noel Da Costa’s “A Set of Dance Tunes for Solo Violin” (1968) is a transformative arrangement of five American fiddle tunes, concluding with “New Orleans Clog Blues.” This is the first commercial recording of the work, which certainly deserves more attention, and Pine’s nimble approach to these tunes is delightful. Coleridge-Taylor Perkinson’s three movement “Blue/s Forms” (1972) delves into shifting tonalities and “blue notes,” while his “Louisiana Blues Strut” (2001) for solo violin reimagines the cakewalk.

Also represented on the album are three of the most well-known African American composers from an earlier era. William Grant Still’s Suite for Violin and Piano (1943) is a true classic. The three-movement work, inspired by sculptors, also explores bluesy syncopated rhythms. Clarence Cameron White’s “Levee Dance,” op. 26, no. 2 (1927) was frequently performed by Jascha Heifetz as an encore piece. The central theme is from the spiritual “Go Down Moses,” to which White added a blue-note chromaticism as well as a showstopping cadenza. Duke Ellington’s popular “In a Sentimental Mood” (1935) is featured in a newer arrangement for violin and piano by Wendell Logan that provides both instruments an opportunity to shine.

On the second half of the album, Pine performs works by contemporary composers. The title track, “Blues Dialogues” by Delores White, is a free-flowing four movement fantasy, followed by “Woogie Boogie” (1999) from Belize-born British composer Errollyn Wallen.  “Filter” (1992), by the always fascinating Daniel Bernard Roumain, draws primarily upon hip-hop and electronic dance music. At Pine’s request, he added a cadenza on a “psychedelic” blues scale, and her execution of this wicked passage is jaw-dropping. Billy Child’s “Incident on Larpenteur Avenue” (2018), commissioned by Pine, is a haunting political statement that “explores the events and impact of the 2016 killing of Philando Castile by a Minnesota police officer,” including the sound of the seven fatal gunshots. Charles S. Brown’s “A Song Without Words (1974) draws upon Blind Willie Johnson’s iconic recording “Dark Was the Night, Cold Was the Ground.” Pine convincingly transfers the work’s improvised vocal line to violin, once again proving her incredible versatility.

It should be noted that the digital version of the album, available as a studio-quality FLAC download, includes as a bonus track Louis Kaufman’s arrangement of “Blues” from William Grant Still’s Lenox Avenue.

Blues Dialogues plumbs the depths of the African American experience, as well as the depth and breadth of Rachel Barton Pine’s virtuosity and interpretive abilities. Now in her prime, Pine has matured into an artist capable of the most subtle nuances and dazzling technical displays, which she demonstrates on every single track of this captivating album.

A member of the Chicago Music Association (originally founded as a branch of the National Association of Negro Musicians), Pine established the Music by Black Composers Project in 2001 and has since collected more than 900 works by 350 composers spanning four centuries. Through her RPG Foundation, she offers curriculum materials for aspiring young musicians, both spreading awareness and offering access to music by Black composers. Additional information on these pedagogical materials can be found on the MBC website.