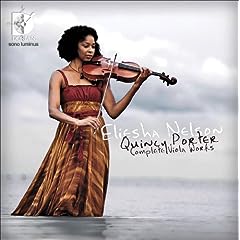 The music of American composer Quincy Porter, a younger contemporary of Charles Ives, is perhaps less familiar to classical audiences than it deserves to be.  Like Ives, Porter grew up in Connecticut and studied composition with Horatio Parker at Yale; but unlike his more famous colleague, Porter took on a full-time musical career as a composer, performer (on violin and viola), and educator.   After graduating from Yale in 1921, he studied composition at the Schola Cantorum in Paris, then in New York with Ernst Bloch and Vincent d’Indy, finally returning to Paris in 1928 on a three-year Guggenheim Fellowship to compose in earnest.  Throughout his career, he taught music theory and composition at several prestigious American schools, including the Cleveland Institute of Music, Vassar College, the New England Conservatory (of which he was dean and later director), and finally Yale.

Porter continued to compose actively during his years of professorship, winning the 1954 Pulitzer for his Concerto Concertante for two pianos and orchestra; his greatest works were perhaps his nine string quartets, which Howard Boatwright has described as “one of the most substantial, and very likely permanent, additions to the repertoire contributed by any composer of Porter’s generation.”1 Porter’s musical style was at once modern and accessible, often featuring long scalar melodic passages over occasionally dissonant accompaniments, and always written with an ear for the idioms of the particular instruments called for in any given piece.

Porter’s works for viola, then, are perhaps his most lovingly written, in the idiom of his own instrument.  Cleveland Orchestra violist Eliesha Nelson chose wisely when programming this recording; not only are Porter’s chamber works long overdue for fresh recordings, but this collection allows the viola to shine as a solo instrument and duet partner.  The crowning piece on this album is the Concerto for Viola and Orchestra from 1948, a neoclassical gem that alternates virtuosic passagework with elegant lyricism.  The smaller chamber works offer plenty of engaging moments, however, particularly the Suite for Viola Alone (1930), Blues Lointains for Viola and Piano (1928), and the intimately entwined Duo for Violin and Viola (1954).

Following is a “film noir” performance of Blues Lointains (courtesy of Dorian Recordings):

Nelson’s playing is warm and graceful, accommodating the technically virtuosic sections and the more lyrical ones with equal ease.  Douglas Roth provides sensitive counterpoint as Nelson’s duet partner in the Duo for Viola and Harp (1957); but the unsung hero of this recording is John McLaughlin Williams, who conducts the Northwest Sinfonia in the Concerto, then doubles as accompanist and duet partner on piano, harpsichord, and violin in nearly all of the other works.  Overall, this album is a fine exploration of little-known twentieth-century viola repertoire, a deserving revival of the chamber music of a respected American composer, and an introduction to some very skilled performers.

Following is a Q & A with Eliesha Nelson and John McLaughlin Williams (courtesy of Dorian Recordings):