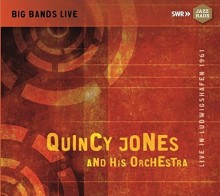 In 1959, Quincy Jones put together a big band orchestra for the European musical Free and Easy. The show lasted only a couple of months, playing for small audiences in Utrecht, Amsterdam, Brussels and Paris. Marooned in Europe with a payroll to meet, Jones and company set off touring the continent, booking venues and collecting money to pay their way forward. Eventually, the band ran out of money and came home to the U.S., with Jones $145,000 (in 1960 dollars) in debt. Mercury Records president Irving Green offered Jones a vice president position, and Jones went on to arrange and/or produce hits by Dinah Washington, Leslie Gore, Billy Eckstine and others. He eventually made his biggest mark on music as a producer (Michael Jackson, Patti Austin, George Benson, Aretha Franklin, etc.), but continued to make jazz and jazz-pop albums throughout his tenure with Mercury.

Jones continued touring with a big band early in his Mercury executive career, and live recordings made in Zurich, Switzerland on March 10, 1961 and the 1961 Newport Jazz Festival in July of that year, have been released by Mercury/Polygram. Jones recorded his last strictly-jazz big band album, The Quintessence, for Impulse! Records in December, 1961, essentially ending his career as leader of a touring jazz big band.

On this CD is the band’s complete concert of March 15, 1961 at the Pfalzbau auditorium in Ludwigshafen, Germany. The well-made mono recording highlights the combination of ensemble and solo playing that was the trademark of Jones’ skilled and modern-sounding band. Featured are excellent live renditions of tunes on Jones’ Mercury studio albums, including “G’Won Train,” “Birth of a Band,” “Stolen Moments,” “Moanin’” and “I Remember Clifford.” Also included is a superb version of the Count Basie classic “Lester Leaps In” featuring great solos by guitarist Les Spann and pianist Patty Bown.

It’s worth listening carefully to Jones’ introduction of the band (track 13, which is followed by a somewhat loose and joyous version of “Birth of a Band,” the title cut to Jones’ first Mercury album). This lineup included many future headliners and leaders on 1960s jazz albums. That Jones could assemble such a band testifies to his influence in the music business even at a relatively young age. Although his greatest career highlights were years forward, this concert demonstrates why Quincy Jones always had the respect of musicians, and always knew how to please an audience.