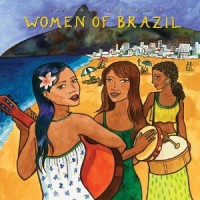 To celebrate its twentieth anniversary, world music and “world pop” label Putumayo Records has put together an incredible compilation of Brazilian contemporary female singers: Women of Brazil. This eleven-track album is full of the melodic sweetness and rhythmic spice of Brazilian women whose voices make the listener think he is in heaven. The typical Brazilian singing style, with its particular smoothness and clear technique, is the feature of this album, where exclusively Portuguese lyrics and jazz influenced arrangements of Brazilian classic songs by Caetano Veloso or Jorge Ben find a refreshing interpretation in the voices of these eleven angels.

The selection of the songs and artists must have been a tough task, for Brazil is a country overflowing with musical talent and an incredibly active music industry. Nonetheless, the selection concept is very inclusive: the album features established artists from the always innovative Brazilian scene, such as Aline Morales, Luísa Maita, and Flavia Coehlo, as well as young and talented artists that are just making their way to the big stages of the global music scene, such as Miriam Aïda and Maguinha. The sensuality of this album will captivate you and will make you want to go and see these artists live, while enjoying a caipirinha on the beaches of Rio de Janeiro.