Identities were constructed and reduced to the color of one’s skin by the government during the apartheid-era in South Africa. The South African government recognized the power that music held in influencing audiences, so they began controlling the radio stations, stopping music from crossing at country boarders, and monitoring performance spaces. Steve Moni, a punk rocker from South Africa, said that his music “made people think. People weren’t used to thinking, people were used to waiting to be told what to do and waiting for permission.” Approximately the first hour of PUNK IN AFRICA documents musicians’ experiences using punk rock music as a political statement from the 1970s Apartheid-era to present day South Africa. The last twenty minutes are divided into a short section on Mozambican punk and another section on Zimbabwean punk music. 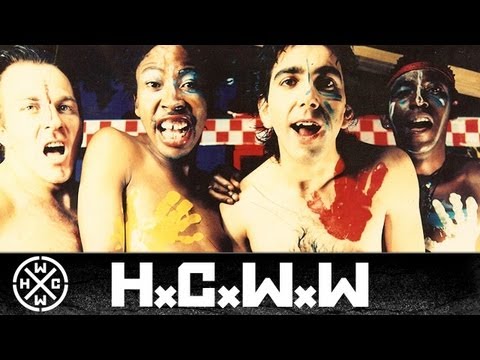 Beginning with bands from major cities, such as Suck from Johannesburg and Wild Youth from Durban, this documentary recounts the fears and uncertainties of performing such politically rebellious music in a time when politics cost people their lives. National Wake, a multi-racial punk rock band, was composed of two white men and two black South African men. One of the man recounts the story of their band for the other three who either disappeared or were killed after the band dissembled. In a touching moment in PUNK IN AFRICA, this member returns to Soweto to visit the family of the two late black South African brothers from National Wake. Without missing a beat, the documentary does not fail to include important historical information linked to place and space in South Africa. Soweto is recognized as the home to the Soweto Uprising when many of the school children protesting the use of English and Afrikaans in the classroom were killed and injured by the army. Through historical contextualization and the intimate telling of the lives and deaths of punk musicians in South Africa, this DVD is another great addition to the recounting of the struggles within Apartheid South Africa and the progress that has since been made.

While seeming tangentially related at first, the last two sections on Mozambican and Zimbabwean punk document the dispersion of punk throughout southern Africa. Providing a reversal of the situation in South Africa, the frustrations of trying to find a locale to perform at in Mozambique is still a common frustration for punk musicians in 340ml. The Rudimentals, “used to play music to conscientise people, to make people aware of what was happening in the country,” but refusing to be involved in a political system that abused human rights the members fled to South Africa to perform there. Once in South Africa, the Zimbabwean consulate in South Africa was foreclosed and the government made it nearly impossible for the lead singer to get his passport back. The struggles to perform music that refuses to conform to the injustices surrounding them in Zimbabwe and Mozambique mirrors the struggles in Apartheid South Africa, and by the end of the film the viewer realizes the close links between the punk music in each of these different southern African countries.

In addition to the film, the DVD includes full music videos, live performances, and personal interviews with artists featured throughout the movie. The interviews with Mac McKenzie from The Genuines and Warrick Sony from the Kalahari Surfers are particularly striking. They display the outstanding musicianship and knowledge of these two men. While this film focused mainly on racial issues within these punk groups, a discussion on gender in these bands was lacking. While two females were pictured in the bands, they were not interviewed and their presence was not acknowledged. Regardless, the ability for music to be used as a resistant force against government-enforced oppression and injustice is seen through various southern African punk music groups in PUNK IN AFRICA. A purchase worth every penny, this film does a great job contextualizing and making personal the stories of these punk artists.