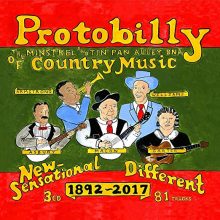 Those who watched Ken Burns Country Music documentary on PBS and want to dig a little deeper into the roots of the genre should find this new box set quite fascinating. Protobilly: The Minstrel & Tin Pan Alley DNA of Country Music 1892-2017, as the title suggests, “documents old country songs with origins in minstrelsy, vaudeville, Tin Pan Alley, ballads, ancient hymnals, deep-south blues, and other venerable popular music genres.” The anthology was meticulously produced by three highly regarded sound recording historians—the vernacular music specialists and radio producers Dick Spottswood and Henry Sapoznik, who also wrote the liner notes, and David Giovannoni, who contributed many rare cylinders and discs from his own collection. Additionally, Grammy Award winning musician Dom Flemons, aka “The American Songster” and former member of the Carolina Chocolate Drops, also contributed to the notes.

As Spottswood explains in the preface, the genesis of the project lies with the late Gus Meade’s bibliography-discography, Country Music Sources (2002), which combined early printed sources (sheet music, etc.) of popular songs with both early and recent recordings. Flemons elaborates in his introduction, “Welcome to the Time Warp,” explaining how the anthology “presents a side by side comparison of songs written for the popular stage of the 1890s as recorded by performers of both the cylinder era (1890s-1920s) and the pre- and post-World War II 78 shellac era (1920s-1950s).” The selected songs are all standards, not only in country & western music, but across all popular genres. Both black and white songwriters and performers are featured, but many of the earliest recordings emanate from the blackface minstrelsy era. However, as Flemons points out, listeners will discover how some “black songsters pull songs of black buffoonery inside out and create humorous toasts of black ingenuity and excellency.”

Disc One opens with “Casey Jones,” a popular song from 1909 performed by early recording star Billy Murray in 1910 and transformed in 1923 by hillbilly recording artist Fiddlin’ John Carson. “Steamboat Bill,” composed by the Leighton Brothers as a sequel to “Casey Jones,” is featured in three strikingly different versions: a 1911 cylinder recording by Arthur Collins; the 1927 recording “Casey Bill” by Earl McDonald’s Original Louisville Jug Band that draws from both songs; and a 1951 recording by the Delmore Brothers titled “Steamboat Bill Boogie.” The juxtaposition of white “coon” singer Arthur Collins with an African American jug band and country music duo who incorporated blues and boogie is an excellent example of the transformation of musical styles and lyrics that the anthology producers strive to highlight. The remainder of the set is organized in a similar fashion.

There are a number of additional performances by black musicians represented in this set. Papa Charlie Jackson offers a bluesy, banjo rendition of “I’m Alabama Bound” from 1925, a song closely associated with Jelly Roll Morton. Also known as “Don’t You Leave Me Here,” disc two features the first jazz performances of the song. Under the latter title, Charles Johnson’s Original Paradise Ten represents the Harlem jazz tradition of the 1920s while Louis Jordan & His Tympany Five’s 1940 Decca recording of “I’m Alabama Bound” bears all of the hallmark’s of his swinging rhythm and blues based jazz combo.

African American five-string banjo virtuoso Charles A. Asbury demonstrates his unique stroke style on “Haul the Woodpile Down” from a rare 1891 cylinder, followed by Uncle Dave Macon’s classic 1927 recording where the lyrics have been transformed to the somewhat nonsensical “Hold That Wood-Pile Down.” Asbury is featured again on the song “I’m the Father of a Little Black Coon,” recorded in 1895 on a newly identified cylinder in Giovannoni’s collection. Written in 1887 by Dayton, Ohio native Gussie L. Davis—one of the foremost African American songwriters of the era—“I’m the Father of a Little Black Coon” pre-dated the more derogatory examples published during the height of the coon song craze and is cited by the compilers as “one of the first attempts to humanize the black experience in composition.”

There are three versions of the pre-Civil War abolitionist song, “Darling Nellie Gray,” concluding with Louis Armstrong’s delightful 1937 collaboration with the Mills Brothers. The song “I Got Mine,” published in 1901, was recorded the following year by white minstrel singers Arthur Collins & Joseph Natus. This version is followed by Delta blues guitarist Frank Stokes’ somewhat subversive 1928 release for Victor. Another highlight is the 1898 performance of  “Who Broke the Lock” by Sam Cousins and Ed DeMoss, cited as one of two surviving recordings by the pair of African American minstrels, with a transcription of the lyrics included. The Georgia Browns offer a country blues version from 1933 featuring guitarist Curly Weaver and harmonica player Buddy Moss titled “Who Stole De Lock?,” while a hot jazz version released the previous year by Jack Bland & his Rhythmmakers features Henry “Red” Allen on trumpet and vocals.

In 1912 minstrel performer Leroy “Lasses” White copyrighted the song “Negro Blues,” one of the first 12-bar blues to be published. The sheet music bore the title “Nigger Blues,” as did the 1916 recording by blackface performer George O’Connor that’s featured here, complete with train sound effects to match the lyrics (which by the way, make no mention of race). African American singers such as Ida Cox and Georgia White popularized the song as “The Blues Ain’t Nothin’ But!”, a title actually drawn from the first verse. White’s rollicking rendition over a boogie woogie piano from 1938 was selected for inclusion, the lyrics substantially changed from a train song (“When a man gets blue, he takes a train and rides”) to “The blues ain’t nothing but a woman lovin’ a married man.”

The set concludes with “My Money Never Gives Out,” composed by African American singer-songwriter Irving Jones (c.1874-c.1932), and ironically first recorded in 1901 by white “coon shouter” Silas Leachman (as “I Don’t Care If I Never Wake Up”) as well as Arthur Collins. These are contrasted with the 1927 Paramount side by Banjo Joe, a.k.a. African American five-string banjo songster Gus Cannon, and the grand finale—an extended version recorded by Dom Flemons and Guy Davis in 2014.

Featuring 81 tracks across three discs, Protobilly: The Minstrel & Tin Pan Alley DNA of Country Music 1892-2017 claims to capture “some of the greatest performances of American music,” and that’s not hyperbole. Highly recommended!