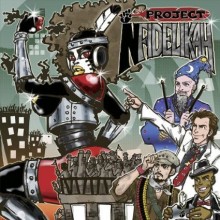 Is it possible to create a supergroup full of lesser-known musical personalities?  Not every musician is a Beatle or Bob Dylan, and not all supergroups, therefore, can have the kind of surefire star power that The Traveling Wilburys did.  However, the perennial problem with supergroups is that, inevitably, dominant personalities usually win out and the group’s sound ends up getting compromised in the process.  Project N-Fidelikah, however, doesn’t have the typical “too many cooks” supergroup problem, in part because it doesn’t have a typical supergroup lineup, drawing musicians from the category of “bands you’ve heard of but don’t know their catalog too well.”  Project N-Fidelikah features vocalist, organist and saxophonist Angelo Moore, aka Dr. Madd Vibe (Fishbone), guitarist George Lynch (Dokken, The Lynch Mob), bassist Pancho Tomaselli (War), and studio drummer Chris Moore. The group’s lineup reads like an ESP guitar ad (Lynch and Tomaselli are both endorsers, and the story is that they met through the guitar company), but plays with the scrappiness of a garage band. N-Fidelikah’s sound draws heavily from the eclectic rock of Fishbone and their contemporaries in the late-’80s/early-’90s LA rock scene,while clearly incorporating other members’ musical personalities. The confluence of these influences makes Project N-Fidelikah eclectic, humorous, and generally off-the-wall.

Perhaps prophesying the 2016 return of fellow LA rockers’ The Red Hot Chili Peppers and the transformation of Rage Against the Machine’s core group into Prophets of Rage, Project N-Fidelikah is about more than indulging the nostalgia market for the funky rock of a particular time and place. Digging deep into funk influences, Chris Moore and Tomaselli set up monster grooves throughout the record.  Perhaps surprisingly for a hair metal superstar, Lynch uses these grooves as a canvas for articulate (even downright economical) guitar work, at times digging deep into the groove with distorted power chords and at other times drawing upon his ’80s chops to provide a burst of energy and color that compliments a given song’s groove rather than overriding it.  Dr. Madd Vibe’s lyrics and sax top off the gradual layering, tackling political issues (“Anchor Babies”), race (“I Wanna Be White (But I Can’t)”), and the abuses that the music industry inflicts upon artists (“Exposure Fi’Pay”).  Even the group’s jammiest (and perhaps most interesting) track, “Deprivation of Independence,” is a meditation upon mass surveillance, while its slow-burn groove is equally useful as a vehicle for lick trading, punctuated by tasty guitar solos from Lynch and sax lines from Angelo Moore.

All-in-all, Project N-Fidelikah is a strong effort by the funkiest supergroup you’ve never heard of.  The album is lyrically and musically challenging, while full of enough tasty grooves and licks to keep listeners coming back for more, even after they’ve absorbed the record’s striking social critique.