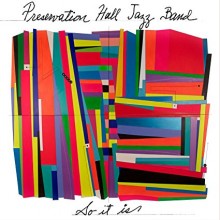 Title: So It Is

Now in its 56th year, the Preservation Hall Jazz Band continues to thrive and regularly record albums. This latest effort is a far cry from the original traditional Dixieland outings, and for that reason it’s likely to resonate with modern audiences.

According to the band’s website, a performing trip to Cuba last year was highly influential toward the writing of this album. Band leader and bass/tuba player Ben Jaffe has integrated Afro-Cuban elements into a New Orleans-style blend of funk and up-tempo jazz. There are still references, here and there, to Dixieland and second-line street jazz, but this version of the PHJB would find a home in the record shelf of a Meters fan as well as his trad-jazz loving elders.

Jaffe’s parents, Allan and Sandra, founded Preservation Hall and organized its first namesake bands, in the early 1960s. Back in the early years, via recordings for Atlantic and then Columbia, the band featured aging but still vibrant local stars and other practitioners of the “original” style of jazz. In more recent times, the band embraced New Orleans’ musical evolution and has collaborated with a wide variety of musicians and producers, moving its sound toward a modern beat-driven jazz style.

It’s worth noting that this album is the second in a row for the PHJB with all original compositions. No more traditional tunes and covers of beloved oldies. The newness of the material is probably a prime reason the band has successfully transitioned to the all-important festival circuit, often paired with rock and pop acts. This is not music to hear while sitting still in a formal concert hall, but rather get-up-and-dance music to power a good outdoor festival mud roll. It’s more party music than contemplation music.

Although all 7 cuts on the album are worth a few careful listens, the featured single “Santiago” is contagiously raucous, and “Convergence” stands out for its funkiness. On the jazzier side of the band’s capabilities are the title track and “One Hundred Fires.” It’s also worth mentioning Walter Harris’s outstanding drum work throughout. The album is beat-driven, and Harris is a very capable driver.

The downside to the party atmosphere is that the music seems wider at the expense of deeper, but the excellent playing mitigates some of the shallowness. This is gut-feeling jazz, more akin to pop music than concert-hall jazz. Alas, like even the best pop music, it has a somewhat plastic soul. Recommend for listening along with friends and fun.