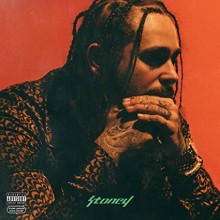 Post Malone made waves in the hip-hop world in 2015 with his single “White Iverson,” a smooth, spaced-out, melodic, flexing anthem very much operating within and even expanding upon modes of contemporary trap music. Malone was quickly signed by Republic Records only months following the song’s release, and the December 9th release of Stoney is his debut album. One of Malone’s strengths on “White Iverson” is his elaboration on musical tropes being pioneered by artists like Young Thug, Future, and Rich Homie Quan, whose work could be said to explore a depressive, emotional underside of trap music. This happens mostly melodically, while the lyrical content remains constructed around “the lifestyle” of a trap star. In fact, all three of these artists’ work represents a move away from lyrical content all together, toward sounds that go where words can’t.

With Stoney, Post Malone offers his contribution to the conversation, an album of songs that work as vignettes of moments of reflection on “the lifestyle” of the trap star, frozen in time and beautifully dramatized. What Malone most excels at is rendering in sound these elaborate, decadent blocks of time in which the listener can pause the club or party scene, explore, scrutinize, and romanticize each detail of the fray. The freeze frame, slow motion feeling is created through heavy reverb, silencing percussion at certain moments, stretching word sounds (often to the point of incomprehensibility), intimate, cascading sounds and melodies, and Malone’s slow, syrupy flow, delivered in what feels like gusts. These all contribute to an overall feeling of being out of time and floating, perhaps in line with the album’s title. Stoney is a set of scenes from the party, a hyper close sonic exploration of moments in the ascent and disillusionment in the emotional life of the trap star. The feeling of the music moves back and forth between flex and disillusion; “Big Lie,” “No Option,” “White Iverson,” and “Money Made Me Do It” are good examples of former, while “Broken Whiskey Glass,” “Cold,” and “I Fall Apart” represent the latter. Both these themes often manifest in the metaphor of a woman’s rejection/fakeness or availability, placing Stoney smack in the middle of the current musical trends articulating the sounds of “f**k boy” consciousness.

However, while several of the songs take “White Iverson’s” emotional, melodic, hip-hop daze as precedent and remain mostly within a trap realm in terms of sounds, Malone goes in a different, more folk/pop direction on others. These include “Broken Whiskey Glass,” “Go Flex,” “Leave,” and “Feeling Whitney,” on which the acoustic guitars and strumming make the songs sound more campy and indie folk. What connects these songs to the others is the pause in time, the critical reflection moment, and, perhaps ironically, perhaps not, Malone’s rendering of black vernacular speech and performance practices. Present throughout the songs is an exploration along the lines of cockiness and confidence, a slow, elaborate dive into “f**k boy” insecurities and an attempt to reckon them with the glorified status “the lifestyle” affords. In this struggle, flex becomes mode and praxis, the sound and sound-practice of caring for oneself, and reigns supreme musically manifest in the swagger of the deliveries, the drops, and the changing flows. Part of the flex is a “no f**ks given” attitude, straddling the modes of flex and disillusion in its signification of both privilege and disillusion. Malone uses typical rap signifiers—jewelry, money, haters, women—to go to an emotional and even tender place for the trope within which he’s working. This is one of many signals of a trend of emotional reflection rap-singing in which the trap star’s depressive yet colossal inner life is revealed via a detached moment of reflection.

With features from Justin Bieber, Kehlani, Quavo, and 2 Chainz, Stoney joins the conversation, its unique contribution being Post Malone’s particular flair for romanticizing the twin modes of flex and disillusion and making it all poppy enough to keep us hooked.