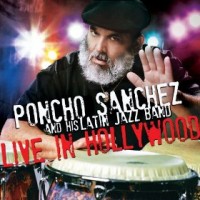 Conguero Poncho Sanchez is a musician who’s old-school but not old-fashioned.  His sound is somewhere between the flying-hips salsa-mania of Mongo Santamaría, Ray Barretto’s Latin soul output on Fania Records and the more laid-back but technically excellent modern Latin Jazz scene. So when Sanchez and his band took the stage last summer as part of the Hollywood & Highland KKJZ Summer Concert Series, the audience got a rare treat—an exquisitely tight and talented musical unit that never failed to deliver the gut-punch excitement great Latin music requires. It’s our good luck that Sanchez’s record label, Concord Picante, captured the proceedings and, in an old-school twist, rushed the album to market just months after the live show.

Concord’s pre-release publicity material makes prominent mention of the fact that Sanchez has been with the label for 30 years and 26 albums, noting that “given all the ups and downs the music industry has experienced in the past three decades, it’s remarkable to find anyone who still retains a sense of allegiance or loyalty.” It seems fitting that a guy who plays music with Sanchez’s verve and craft would adhere to old-school values.

In concert, Sanchez pays tribute to two late mentors, jazz pianist and composer Clare Fischer and band leader extraordinaire Santamaría.  Highlights of the concert are a performance of Fischer’s “Morning,” and the band’s blazing rendition of “Afro Blue,” dedicated to Santamaria. There’s also a great 12-minute medley of Sanchez’s own tunes. A final high point is a down and dirty cover of “Cross Cut Saw” featuring Sanchez’s able vocals.

Always fun, never overly analytic but clearly the work of skilled professionals, Live in Hollywood makes for a great hour of listening.