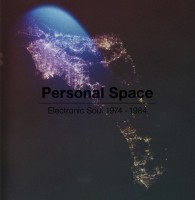 Chocolate Industries’ new compilation of rare and obscure early Black American electronic music is a fascinating and infinitely listenable introduction to some early pioneers (or, perhaps less generously, explorers) of experimental music, those who moved beyond the tools of traditional rock ’n’ roll.

When phrases like “compilation of rare and obscure experimental ___” are bandied about, it sometimes feels less like you are about to listen to a great album and more like you are about to listen to an “interesting” album or an album whose aesthetic and historical relevance you can “appreciate.” Personal Space, however, manages to be a great album that is, indeed, very “interesting.” Its liner notes succinctly detail each selection in such a way that you feel both informed and inspired to immediately hit up Google for more information.

The album features great tracks that flow into one another seamlessly, even though the artists often approached the new technologies in startlingly different manners. Since every song on this 16-track compilation is unique and curious in its own right, I’m going to run through a couple of highlights. These songs immediately jumped out to me and engaged me, sometimes with their funky grooves and sometimes with their unexpected experimentations.

The most amazing revelation in this compilation is, in my opinion, Key & Cleary’s “A Man.”  Sylvester Cleary and Jessie Key, two Buffalo, NY natives, joined forces to create this amazing soul track with an African inspired hand-drum loop overlaid with an electronic cymbal beat. The polyrhythmic beat is infectious and entirely unexpected. On top of that, the almost spoken, soulfully recited lyrics are so minimalist and well-crafted it would not be surprising to find this song on Pitchfork Media’s New Music Radar. The beginning lyrics, “My muscles are of steel/ My mind of complex computers/Daily I struggle for understanding/And daily I breathe to be understood,” could easily be found on an album from Death Grips or any number of contemporary experimental musicians.

On the funkier side of things, there are tracks like “I Finally Found the Love I Need” by Jerry (J.G.) Green (a.k.a. The Voice Master), a member of the second iteration of famed Motown group The Contours. The song’s dark (almost humorously so), stripped down, futuristic electronic sound, layered with Motownesque vocals could have changed the face of techno if anyone would have heard it. A more spiritual experiment comes from Otis G. Johnson’s “Time to Go Home.” Johnson’s ethereal gospel track, which was recorded at home with only his voice and his urge to spread his faith through song, an organ and its factory installed metronomic pre-sets, creates a soothing, slightly off-kilter musical landscape, that occasionally features a child’s singing.

There is an earnest, outsider appeal to most of the music on the Personal Space compilation, which should be on the radar of anyone interested in music that challenges creative standards.