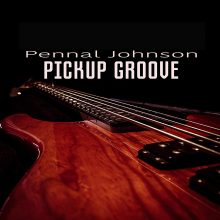 It’s beautiful when you discover a new artist. Pennal “PJ” Johnson—a bass player, writer, and entrepreneur from Chicago—has actually been on the scene for a while now. In addition to a couple of holiday projects, he has released two well-regarded albums: Cissy Strut (2016) and Conversations: Live in Chicago (2016). Johnson’s talent has backed up artists such as Kurt Carr, Abraham Laboriel and the late Andraé Crouch, yielding respect from jazz and gospel audiences alike. Pickup Groove is Johnson’s latest CD, which includes studio versions of several tracks featured on Conversations. Again, if you are new to the artist, you’ll immediately hear why the bassist’s work is praised.

The title track “Pickup Groove” is proof of Johnson’s mastery. His playing on bass overshadows all other instruments, but to be clear, he is not grandstanding. As with previous albums, he includes a few songs that tap into his gospel roots. “Christ” is one of those tracks, featuring a female vocalist repeating the words of affirmation, “you’re beautiful.” This is a great change of pace from deeper cuts such as “Nasty Funk” and “Thumping Hearts.”

Johnson changes the pace gain on the spoken word track “Are We.” Over a frenetic beat and improvised jazz riffs, Johnson takes us on a ride through history using text from the infamous Willie Lynch letter—an account of a 1712 address given by a West Indies plantation owner in which he divulges his ‘secret’ to controlling his enslaved laborers. The piece concludes in musical mayhem as Johnson asks repeatedly, “are we?”

Pickup Groove is my first introduction to Pennal Johnson and I’m sorry I’m late to the party.