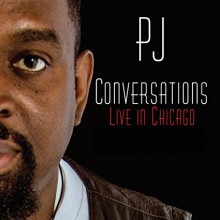 Conversations: Live in Chicago is a strong set by bassist Pennal Johnson, recorded in his hometown.  The record mixes programmatic themes—as on the tracks “Are We’” Parts I, II, and III, which deal with race, representation, and history—with straight-up funky jazz.  Johnson’s more conceptually challenging tracks on this record are sonically reminiscent of Sun Ra at times, and jazz-fusion pioneers at others.  However, the standouts on here are his (presumably) crowd-pleasing covers of funk standards such as “Cissy Strut” and “Mothership Connection.” He also digs deep into gospel on the tracks “Lead Me Guide Me” and a gospel rendition of the film Rocky’s theme, “Gonna Fly Now.”

Johnson is accompanied by a rhythm section full of crack players, including Buddy Fambro (guitar), Andre Henry (drums), Mark LeBranche (keys), and Royce Cunningham (percussion), as well as great horns and a strong vocal section that shines on his funky cover of The Beatles “Come Together.” Of course, as leader of the band, Johnson takes the starring role, playing the melodies of most tunes, and establishing the infectious grooves that permeate this release.  While the sudden alteration between hardcore socially-oriented jazz and funky grooves can get a bit dizzying, the record at times feeling like two distinct sets blended together, there is no doubt that the musicianship on Conversations: Live in Chicago is of the highest caliber.