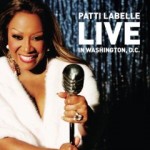 Patti LaBelle is a consummate performer who has delighted fans for over five decades with her incredible audible stylings, multi-octave vocal range and dynamic performitivity. This new release, Patti LaBelle Live in Washington, D.C., recorded during a 1982 promotional tour for her albumThe Spirit’s In It, captures her incredible, legendary performance while showcasing her ability to relate emotionally to her audience. The tapes of this concert languished in Gamble & Huff’s vault for nearly three decades, and are now being released for the first time.

LaBelle was first introduced as a member of the Bluebells in 1962. That same year they scored their first Top 40 pop hit with the doo-wop single, “I Sold My Heart to the Junkman.” It wasn’t until 1974 that Patti LaBelle revamped the group by re-naming them Labelle. They began to dress as space, rock, funk goddesses and sang about sex and politics; a feat no other female group had attempted. In 1975 the song “Lady Marmalade“ hit #1 on the Hot 100, becoming Labelle’s best selling single and putting them on the map. When Patti LaBelle went solo, she followed the same groundbreaking approach.

I have seen Patti LaBelle perform live many times, and she effortlessly connects with her audience through sheer, raw talent that is never presented as pretentious or pompous “grand diva” theatrics. She certainly engages her audience in this concert, performing fresh arrangements of her most well-known classics such as “If You Don’t Know Me By Now,” “Lady Marmalade,” and “You Are My Friend” with storytelling that makes each performance unique and new. Production and musical qualities are exceptional. Unlike other live concert recordings, there are no edits or breaks that negatively affect the performance, which is allowed to flow seamlessly from beginning to end.

Though categorized as a soul/R&B singer, Patti has sung various genres of music, including rock, funk, gospel, and country. She always brings soul and emotion to her songs, and possesses the qualities of performance and showmanship necessary for longevity. Listening to Patti LaBelle Live in Washington D.C. is a wonderful experience. The album provides diehard fans of Patti LaBelle with new arrangements of classics and serves as a great introduction for the novice fan.