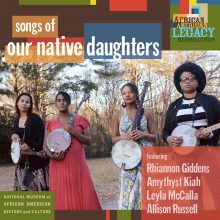 “It is only in his music…that the Negro in America has been able to tell his story. It is a story which otherwise has yet to be told and which no American is prepared to hear.” James Baldwin wrote these words in his 1955 collection of essays, Notes of a Native Son. These are the words that inspired the title for the collaborative project between four African American female folk musicians. Coming together under the name Our Native Daughters, Rhiannon Giddens, Amythyst Kiah, Leyla McCalla, and Allison Russell have combined their unique talents, distinct voices, and shared mission to shed light on the oft unknown influence of African Americans on Americana music to produce the much anticipated album, Songs of Our Native Daughters.

Rhiannon Giddens, who co-produced this album along with Dirk Powell, writes the following in the album liner notes: “Songs of Our Native Daughters shines new light on African American stories of struggle, resistance, and hope, pulling from and inspired by 17th-, 18th-, and 19th– century sources. Interpreting, changing, or creating new works from old ones, this album confronts the ways we are culturally conditioned to avoid talking about America’s history of slavery, racism, and misogyny, knowing that what’s past is prologue—but only if we let it be.”

Giddens is one of the founding members of the Grammy Award winning folk, old time, and blues band, the Carolina Chocolate Drops. One of the events that inspired her to initiate this collaborative project was attending the Smithsonian’s National Museum of African American History and Culture with her daughter. She came across a text, “Pity for Poor Africans,” penned by English poet and abolitionist William Cowper, that read, “I admit I am sickened at the purchase of slaves…but I must be mum, for how could we do without sugar or rum?”

This quote inspired the song, “Barbados.” The tune heard on this track is a direct reading of D.W. Dickson’s interpretation of music from enslaved black folks in Barbados. Although initially interpreted through a Eurocentric lens (and then again by Giddens), it remains a “portal, however imperfect, to a long time ago, and to a people whose lives often passed unmarked and unmourned by the society around them.” This tune is bookended by two poems: “Pity for Poor Africans” and a second poem written by co-producer Dirk Powell that serves as a modern critique of society.

Amythyst Kiah wrote another powerful song for the album, “Black Myself.” A native of Johnson City, Tennessee, Kiah experiments with a mixture of blues and old time music in both her solo career and with her band, Her Chest of Glass. Serving as a protest of colorism and internalized anti-blackness, “Black Myself” is an anthem for “those who have been alienated and othered because of the color of their skin.”

Kiah co-wrote “Blood and Bones” with Allison Russell—a member of the Americana folk duo, Birds of Chicago. The song was inspired by the rise of white nationalist and neo-Nazi sentiment during the 2016 U.S. election. This title also serves as a reference to the practice of slave owners selling their own “flesh and blood” into slavery. Russell contributed two other songs on the album. “Quasheba, Quasheba,” tells the story of an enslaved woman named Quasheba in Russell’s family, who was presumably sold off the coast of Ghana to a sugar cane plantation in Grenada. “You Are Not Alone” is a song about endurance, strength, and survival that is largely dedicated to her daughter, Ida Maeve.

The final voice of Our Native Daughters is that of Leyla McCalla. A member of the Carolina Chocolate Drops and a multi-instrumentalist, McCalla was a natural fit for the creation of this project and provides vocals as well as banjo, guitar, and cello accompaniment. Being of Haitian descent, McCalla wrote “Lavi Difisil,” a tune inspired by Althiery Dorival, a Haitian troubadour, which she performs in Kreyòl.  McCalla also co-wrote “I Knew I Could Fly” with Russell. Both have been influenced by American Piedmont blues guitarist Etta Baker and her presence can certainly be felt in this song.

Other songs on the album include “Mama’s Cryin’ Long”—a telling of an enslaved woman who kills an abusive master; a reinterpretation of Bob Marley’s “Slave Driver;” a song that focuses on “the real hero of the John Henry legend” (“Polly Ann’s Hammer”); a tune that details the obstacles African Americans have faced in trying to obtain an education (“Better Git Yer Learnin’”); a track that captures the “Music and Joy” of this project; and finally “Moon Meets the Sun.” Written collaboratively between the four women, “Moon Meets the Sun” represents the essence of the album. With lyrics like “we’ll endure this / you can’t stop us / and we’re dancing” or “ah you steal our children / but we’re dancing / ah you make us hate our very skin / but we’re dancing,” this song embodies Our Native Daughters’ mission to showcase the resilience of their ancestors.