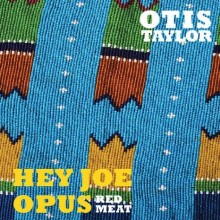 Visionary roots music songwriter and “trance blues” originator Otis Taylor has released a string of albums in the last decade, typically focusing on “unflinching tales about racism, struggle and heritage.” His latest project, Hey Joe Opus/Red Meat, is a concept album peppered with blues, folk, jazz and rock. Considered a suite in 10 parts, Taylor uses “Hey Joe,” the song made famous by Jimi Hendrix, as a leitmotif providing the overarching theme “about decisions and their consequences”—in this case the murder of a cheating lover. The other recurring thematic element is provided by his original song “Sunday Morning,” featured in three different renditions.  If this sounds redundant, rest assured that each interpretation is highly improvisatory, uses different instrumentation, and bears little resemblance other than title.

The album opens with version A of “Hey Joe,” which features the atmospheric psychedelic guitar of Warren Haynes (Allman Brothers), with nice contrasts in timbre provided by violinist Anne Harris and a punchy cornet solo by Ron Miles. Following is a lengthy instrumental version of “Sunday Morning,” which melds into the lament “The Heart is a Muscle (Used for the Blues),” reinforcing the theme of “love that could drive a person crazy.”  “Red Meat,” used as the album’s subtitle, is a sparse arrangement featuring Taylor on acoustic guitar and vocals, singing “sometimes you win in love and sometimes you lose.” Drawing upon contemporary themes, “Peggy Lee” is an original song about a man named Lee who transitions to a woman called Peggy. This song has all the makings of a classic folk ballad, reinforced by the contributions of David Moore on banjo.  Another original song, “They Wore Blue,” draws harmonically from “Hey Joe” and signals the mid-point of the album. Arranged as a trio with Taylor on electric guitar, Todd Edmunds on bass, and Ron Miles on cornet, this instrumental features extensive overdubbed horn sections.

The second part of the suite begins with “Hey Joe (B),” featuring Daniel Sproul and Taylor Scott on guitar, David Moore on banjo, Anne Harris on violin, Langhorne Slim on backing vocals and acoustic guitar, Steve Vindaic on organ, and Gus Skinas on Moog. This version offers many interesting contrasts as sections switch between psychedelic guitars, folksy strings, and synthesizer. Following is another instrumental version of “Sunday Morning,” which flows into “Cold at Midnight” with Taylor riffing on the possible reasons why his lover has not returned home. Closing with “Sunday Morning (C),” Taylor and Scott keep the reverb pedal to the metal for a rousing finish to this stellar album.