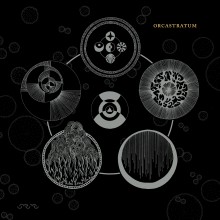 When you have a band name that combines Orca, “the sophisticated, mysterious, intelligent killer whale,” with Stratum, a way of categorizing or layering members of a group—one would expect a certain level of sonic diversity. This is certainly the case with Orcastratum’s eponymous debut album, recorded live at Dean St. Studios in Soho, London. Blending jazz, blues, classical, African, and “UK left field” musical traditions, the London-based group aims to transcend the predictive qualities of mainstream music. Led by producer and songwriter Glen Scott on keyboards, other members of the group include Ralph Salmins on percussion, Neville Malcolm on acoustic bass, and Eric Appapoulay on electric and acoustic guitars.

The album opens with “Spirit of the Skog.” After a brief intro hinting perhaps at fog shrouded forests, the track switches to an up tempo jazz tune featuring master Senegalese musician Solo Cissokho, who artfully intertwines kora melodies and vocals. “Unexpected Relations” is true to it’s word, contrasting classical idioms on the piano against a driving percussion rhythm and ethereal vocal overdubs. Swedish vocalist BERG is the featured guest on “Hallelujah Ironically,” along with Binker Golding, who adds to the contrasting sections with an extended sax solo. Despite its title, “Wizdoom” is an upbeat, piano-centric contemporary jazz tune with lush flourishes and perhaps only a hint of foreboding.

For many, the highlight of the album will be “No Need,” featuring guitarist Eric Bibb and gospel singer Shaneeka Simon. On the intro, Bibb’s lightly plucked guitar ostinato seems to mimic the kora from the opening track. As the song builds, Bibb joins Simon on vocals and the tone becomes dark and urgent, the accompaniment more ominous. Singing “no need for the fussing and fighting my friend,” the musicians bring the song to a powerful climax.

Though only five tracks, Orcastratum is an impactful debut that only hints at the group’s complexities, but certainly fulfills Scott’s “age old quest to inspire myself and others without borders.”