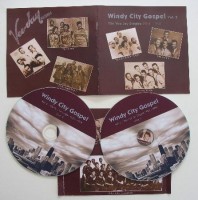 Title:  Swingin’ on the Gold Gate vol. 2; A Survey of Bay Area Gospel

These two recent Macomba releases from the archives of Oakland’s Opal Nations feel special, like being given a rare opportunity to sift through Nations’ vast collection of rare gospel records. Much in the way that experience implies, don’t expect smooth album sequencing or remasters here, just the music straight from his shellac and vinyl to your CD player.

What the albums lack in finesse they more than make up for in uniqueness, thoroughness and rarity of selections and in the meticulously researched and detailed liner notes written by Nations. Reading through the notes calls to mind the classic music-nerd fantasy of going into a record shop and being schooled by the master—the record store owner with knowledge of music so encyclopedic that it makes you feel ashamed to have even jokingly considered yourself a music connoisseur.

While both of these records are gospel compilations they differ by organization and geography. Windy City… is a label overview, cataloging gospel releases on South Cottage Grove from 1947-1959, while Swinging… is a broader overview of overlooked and forgotten songs from the San Francisco Bay area gospel scene in the late 1940s to late 1950s. One commonality between the records, however, is their massive track listings, with each double-CD set featuring more than 50 songs. There is something on these compilations for any fan of early gospel music, so I have provided a brief list of top picks from each to whet future listener’s appetites.

Windy City… is comprised mainly of male gospel quartets, which to all but the most dedicated fans can begin to sound a little repetitive. Lest one become complacent, however, there are intriguing and excited tracks that pop out. One of these tracks features ex-bluesman and entertainer turned sanctified singer Rev. Dwight “Gatemouth” Moore’s “The Bible’s Being Fulfilled Every Day.”  The rolling piano and ramshackle choir accompaniment, when mixed with Moore’s blue-hewn growl, offers a rollicking gospel romp. Another standout track is the Evangelist Singers of Alabama’s simple “Lord, Stop the War,” a gospel quartet piece with a clear message that is as relevant now as it was in 1951. Both tracks from Elder Charles Beck are great, but the humorous “Wine Head Willie Put That Bottle Down” is a clear winner, with Beck shouting at the drunken Willie over light cymbals, jazzy piano and smooth organ chords. Other notable tracks are “The Gospel of Jesus Christ (Part 3),” a forceful, live sermon from Rev. H. R. Jelks, and “Precious Memories, Parts 1 and 2,” from the Ellis & Dixon Spiritual & Vocal Group, one of the few on this record to feature a female vocalist.

Swingin’… features more diverse content and a thorough history of the Black church in the Bay Area, from the concert gospel tradition, to the revival style gospel throwdowns, to the various mass choirs. This two disc set has too many stand out tracks to give its fullest due in a brief review so, again, I will touch on a few outstanding tracks. One of the most intriguing songs is “Walking in Jesus Name” performed in 1952 by an eight-year-old Sly Stone on voice and guitar. With a raspy tone aged far beyond his years, Stone produces a poignant sound that sticks with the listener. He is already a more than proficient guitar player with talents foreshadowing his later success My personal favorite track is Ed Gibson and the Oakland Silvertones singing “The Lambs.” There is a dark ambience to this slow and dramatic song with a drawn out, descending minor chord chorus of “Listen to the Lambs.” If you didn’t know you were listening to a gospel album you might think you had stumbled on a great, lost early California rock track, but the context makes it even more appealing.

All in all, these releases are definitely worth acquiring if you have any interest in historical gospel recordings. Although they do take a little work to get through due to the rough quality of some recordings, the wealth of these selections in both rarity and variety make them more than worthwhile.