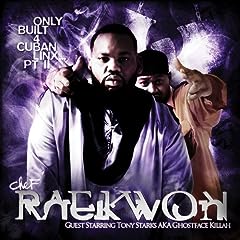 Though it’s been roughly twenty years since the commercial inception of hip hop music, the genre is at the crossroads of modernity. A new aesthetic is rapidly becoming dominant, relegating once dominant styles to relics of the past.  Artists who were once, either critically or commercially, at the summit of the music are now outside of the core’s consciousness, struggling to maintain relevancy in an every changing landscape. Wu-Tang Clan member Raekwon is one such artist. Fifteen years ago, he and his clan were the essence of hip hop; a crew who fearlessly battled the early stages of modernity, maintaining the true school’s position in the negotiation of power.  Raekwon, thanks to the legendary Only Built 4 Cuban Linx, was leading the charge. At the end of the decade, however, Rae found himself lost in a hip hop world run by once great artists (Jay-Z, Kanye West) who could be accused of sacrificing substance for style and newcomers (Wale, Drake) who would have likely been of a marginal class in his day. Only Built 4 Cuban Linx II (2009) is not just Raekwon’s comeback album, it is a manifesto or call to arms for his generation of hip hop heads.

The album opens up with “House of Flying Daggers,” a traditional Wu-Tang joint, produced by the late great J. Dilla. Raekwon, Ghostface, Method Man, Inspectah Deck, and GZA tear through the thunderous beat with a collective venom rarely seen from them the last few years. On “Penitentiary,” electronic producer and film scorer BT provides Rae and Ghost with a menacing beat, allowing them to prove that they remain one of hip hop’s greatest duos. Beanie Sigel steals the show on “Have Mercy,” which also features the soulful singing of Wu staple Blue Raspberry.  The all too brief “Pyrex Vision” finds Raekwon in straight Wu-Gambino mode over a Marley Marl heater.

The sound turns more commercial on the Dr. Dre produced “Catalina,” but Raekwon remains absolutely raw, spitting unbridled street tales with assistance from R&B singer Lyfe Jennings. Rae, Ghost, GZA, and Masta Killah flex their storytelling skills on “We Will Rob You” with a little help from Slick Rick. If there is a single best track on the album, it is the aptly titled “Ason Jones,” Raekwon’s touching dedication to the late Ol Dirty Bastard. On the song, a vulnerable Rae waxes poetic over a beautiful Dilla backdrop. A few clips of Dirty himself add to this very touching tribute. Other notables include “Sonny’s Missing,” “Mean Streets,” and the epic closer “Kiss the Ring.”

Following is the official video for “Catalina” featuring Raekwon and Lyfe Jennings (courtesy of IceWaterTV):

Only Built 4 Cuban Linx II is an outstanding record, one of the best of the decade. The production team (RZA, J. Dilla, Pete Rock, Alchemist, Marley Marl, Dr. Dre and more) constructed a powerful sonic landscape that Rae and his Wu-Gambino’s handled masterfully. Unlike Cuban Linx I, Rae rarely got outshined. This is undoubtedly his record and he provides the majority of its memorable moments. At the same time, however, the Wu (and extended family) influence is strong as his fellow Clan members make solid contributions.

On Cuban Linx II, Raekwon was able to bring the late-1990s, East Coast sound into the 21st century.  The magic of classic Wu-releases such as Return to the 36 Chambers: The Dirty Version, Liquid Swords, and Iron Man was not only resurrected, but reformed into a package that allowed nostalgia and progress to peacefully coexist. This absolutely incredible record shows that no matter what direction the genre is headed, there is always room for great music and artists.