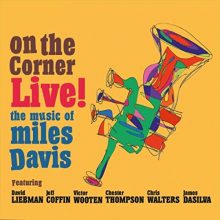 Recorded live in Nashville in 2015, On the Corner Live!: The Music of Miles Davis features five top artists reimagining the music of Davis, sans trumpet. Rather than duplicating the tracks on Davis’s 1972 jazz fusion album On the Corner, the musicians have selected various tunes from the Miles Davis catalog. The mastermind behind this project is saxophonist Jeff Coffin, who brought in Dave Leibman, soprano and tenor saxophonist on the original album and a member of Davis’s band from 1970–1974. Joining Coffin and Leibman is Nashville session musician James DaSilva on guitar, the amazing Victor Wooten on electric bass, Chris Walters on keyboards, and Chester Thompson (Weather Report, Genesis) on drums. As one might expect, this band displays some crazy synergy.

Liebman opens the project with a short talk about Miles and the reception of On the Corner back in the day, followed by Joe Zawinal’s “In a Silent Way.” On the title track, the group takes a slow and sinuous approach, really stretching out each section. Leibman takes over on the more avant garde “Wili (for Dave),” a nine minute exploration of sonic boundaries. On the short “Bass Interlude,” Wooten freely improvises with minimal accompaniment. Getting back to the original album, Davis’s “Black Satin” is primarily another sax showcase across the 12 minute track. The funkiest track on this set is “Mojo,” which harkens back to Bitches Brew era Miles. This freestyle jam traverses through some pretty wild territory before concluding in harmony. The album closes with another funky jam, “Jean Pierre,” which is a little more mainstream but certainly wins the audience’s approval.

On the Corner Live! is a fun, genre defying project that revisits Miles Davis’s electric period while adding contemporary influences.