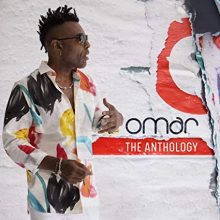 London-born neo-soul singer Omar Lye-Fook MBE, known as the “Godfather of UK Soul,” has now been recording for 35 years. A musical prodigy, by the age of five he was learning to play the drums from his studio musician father and went on to study other percussion instruments as well as piano, trumpet and bass guitar, eventually matriculating at the Guildhall School of Music. Omar’s debut single, “Mr. Postman,” was released on his father’s Kongo label in 1985, and his debut album, There’s Nothing Like This, followed in 1990. From that point forward Omar’s career took off, and before long he was recognized not only as a uniquely talented singer and multi-instrumentalist fluent in multiple genres, but also as a composer, arranger, and producer. All of Omar’s talents are showcased on his new two-disc set, The Anthology, which includes hits from the past three decades along with a few lesser known and previously unreleased tracks.

The set opens with one of those previously unheard tracks, a duo with British soul singer Terri Walker on “Pass It On,” a new single from this anthology. Also featured are some of Omar’s classic collaborations, including the funky “Be Thankful” with Eyrkah Badu, the beyond fantastic “Feeling You” with Stevie Wonder, “Bully” with hip-hop/reggae producer Scratch Professor (Omar’s brother), “Vicky’s Tune” with rapper Ty and pianist Robert Glasper, “Feeds My Mind” with Natalie “The Floacist” Stewart, “De Ja Vu” with Cape Verdean singer Mayra Andrade, and “Gave My Heart,” performed and co-written with the great soul singer and songwriter Leon Ware. Other tracks selected from Omar’s seven studio albums run the gamut, drawing elements from R&B, jazz, hip hop, and reggae before concluding with the upbeat “I Want It To Be,” a more recent neo-soul original with a Latin groove. Across the 33 tracks of this expertly sequenced anthology there is something for everyone, and enough variety to keep listeners attention to the end. If you are unfamiliar with this British superstar, The Anthology offers the perfect introduction.