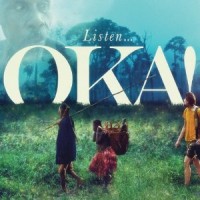 Language: In Sango, Akka, French and English, with English subtitles.

OKA! is a film based on Louis Sarno’s memoir Last Thoughts Before Vanishing From the Face of the Earth and combines dramatizations of his experiences among the Bayaka over the course of two decades with fictional content. Although the film soundtrack compilation (now available on CD) does include a few Afro pop recordings, for the most part it was created and performed by the Bayaka or co-composed with Chris Berry and accompanied by Western musicians. The Bayaka characters are played by members of the Yandoumbe community.

In OKA!, independent ethnomusicologist Larry Whitman is diagnosed with liver failure. Rather than waiting around for his transplant, he heads off for one last trip to Africa in search of the molimo, the final instrument needed for his collection of Bayaka music. Upon returning to Yandoumbe in the Central African Republic, he discovers that the Bayaka have been driven from the forest by a new sawmill and by the efforts of the Bantu mayor to introduce Western bureaucracy. The mayor even hatches a plot to pin elephant poaching on the Bayaka so that they’ll lose further control of their ancestral land and future to the government. Against the mayor’s orders, Larry enters the forest seeking to unite with Sataka, the Bayaka’s shaman. Fearing what fate may await their inexperienced American friend, the Bayaka follow him and, in doing so, return to their traditional way of life. 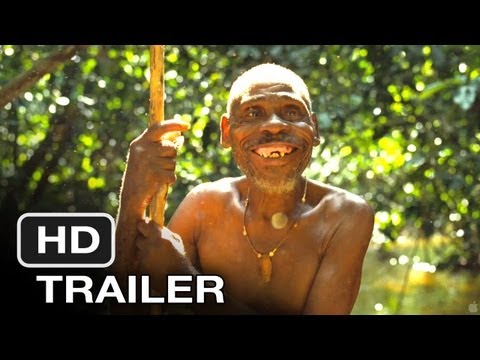 In the words of director, co-writer, and producer Lavinia Currier, the primary purpose of the film is to celebrate “a people who are perfectly adapted to their natural environment, and who, despite the extreme remoteness and dangers of their forest home in Central Africa, always find opportunities to express their humor, joyfulness, and musical genius.” As a result, the story isn’t fleshed out in great detail, but rather serves as a framework for exploring the Bayaka’s daily lives and soundscapes. The first, shorter portion of the film explores the community’s marginalization and is dominated by the sounds of the sawmill and various genres of Afro pop. Once Larry and the Bayaka are reunited with the shaman, however, the film switches to a series of musical performances interspersed and interwoven with the sounds of local birds, animals, and insects. Among the featured genres are social dance songs, women’s songs (including water drumming), children’s games, mask dance songs, and the sounds of a healing ritual. These are also included on the CD soundtrack along with the co-composed pieces, tracks from previously released field recordings of Bayaka music, and ecological soundscape recordings.

For anyone studying the representations of indigenous music and culture by the media or the use of media for the empowerment of endangered culture groups, Oka! is a must see film and will undoubtedly be the source of much conversation among ethnomusicologists and anthropologists in the months to come. It’s also a beautiful film and thoroughly enjoyable for anyone interested in Bayaka culture or traditional African musics.

Oka! is currently showing in selected cities; no DVD is available at this time.