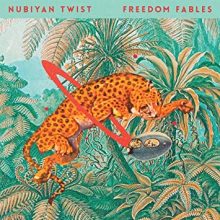 Since their formation in 2009 at the Leeds College of Music, Nubiyan Twist has gone on to sell out major concerts and collaborate with iconic musicians like Ghanaian highlife king Pat Thomas and pioneering Afrobeat drummer Tony Allen. The London-based collective is known for their captivating and unique blending of jazz, Afrobeat, and highlife music with electronic touches. Nubiyan Twist’s much-anticipated third album, Freedom Fables, builds on the group’s past success with the new feature of rising star vocalists.

On Freedom Fables, Nubiyan Twist continues to blend modern sounds with traditional elements – even in the studio. The album was recorded at Henwood Studios in rural Oxfordshire, where the space is soundproofed by straw bales but decked out with the best analogue and digital equipment. According to co-founder Tom Excell, each of the nine songs on the album tells a story relating to “a world that is increasingly shaped by divergent outlooks, whether it’s through politics, religion, or the media.” Gossip is a theme in many of the tracks, including the jubilant highlife-inspired “Ma Wonka” sung by Pat Thomas and “Tittle Tattle,” a fiery song with vocals by Cherise Adams-Burnett about deceit in the music industry. Other songs are more hopeful, like “Buckle Up” with the tender vocals of Nick Richards that call for breaking patterns of negativity. Heartbreak is tackled by Ego Ella May on the raw and intimate “24-7” and Ria Moran addresses relationship matters on the futuristic and funky “Morning Light.”

Freedom Fables is filled with story-songs that aim to unite and liberate. The Nubiyan Twist collective brings together immensely talented artists who, through the deft blending of diverse musical traditions, have created a distinct and spellbinding sound.