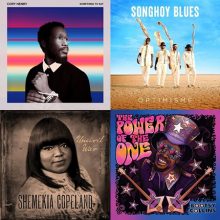 Welcome to the November 2020 issue of Black Grooves, sponsored by the Indiana University Archives of African American Music and Culture.

Our top features this month are The Power Of The One from funk legend Bootsy Collins with appearances from Christian McBride, Branford Marsalis, Victor Wooten, Snoop Dog, and members of the IU Soul Revue; and Uncivil War from blues queen Shemekia Copeland that probes deeply into the divided state of our nation.

New R&B/soul releases include Cory Henry’s socially conscious project Something to Say and Aloe Blacc’s All Love Everything. Also featured is the debut album All of This from Oakland reggae-rap fusion group Roots And Tings; Optimisme from the Malian supergroup Songhoy Blues; the self-titled debut from the Benin girl group Star Feminine Band; and the compilation Your Man of Faith featuring recordings from 1937-1956 by singing evangelist Elder Charles Beck.

Wrapping up this issue is our list of October Black Music Releases of Note.