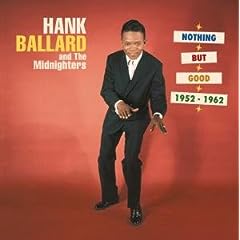 Artist: Hank Ballard and the Midnighters

Bear Family Records has done the popular music world a huge service by issuing this five CD box set, Nothing But Good: the King/Federal Labels, 1952-1962, accompanied by a colorfully illustrated 83-page oversized book authored by Bill Dahl. The CDs contain the recordings of the band known variously as the Royals, the Midnighters, and Hank Ballard and the Midnighters, starting with 1953’s “I’m so Blue” and ending with 1962’s “Bring Me Your Love.” The music itself is infectious, reproduced with splendid production values (a Bear Family hallmark), and the package includes alternate takes and previously unreleased tracks.

Significantly, the songs are all ones on which Ballard, not an original Royal, sang lead. In the early going the members shared vocal duties more evenly, but Ballard’s clear, strong voice; faultless phrasing; and songwriting prowess made him the star of the act. As Dahl notes, the Midnighters “were the first Detroit R&B group to transcend their local standing to really make it big on a national basis, and Ballard was their chief source of material.” And as a contemporary of the Midnighters told Dahl, “The Midnighters were the Temptations before the Temptations in Detroit.” [p. 3]

Hank Ballard is probably most often remembered for his role in two incredible pop music phenomena. In 1954 he and the Midnighters recorded a string of records that, despite a near-total lack of mainstream radio airplay, sold in the millions. These were the “Annie” songs: “Work With Me Annie,” “Annie Had a Baby,” “Annie’s Aunt Fannie,” and the thematically linked “Sexy Ways.” Then, in 1958, the Ballard-penned “The Twist” launched a dance craze that lasted a few years (odd for a teen dance craze), transformed how people danced to up-tempo pop music, and inspired dozens of Twist songs by acts as diverse as the Isley Brothers (“Twist and Shout,” “Twistin’ with Linda”), Sam Cooke (“Twistin’ the Night Away”), and Joey Dee and the Starlighters (“The Peppermint Twist”).

Celebrities flocked to Twist clubs like NYC’s Peppermint Lounge to see and be seen twisting. The fad was so pervasive that even TV sitcoms got into the act, with the Dick Van Dyke show, for instance, featuring a rock star creating a teen dance craze with a very Twist-ish “The Twizzle.” The Flintstones got into the act, too, but the less said about “The Twitch” as performed by prehistoric cartoon character Rock Roll, the better. “The Twist” reached number one on the American pop charts twice, in both 1960 and 1962. Unfortunately both times it was the cover version of the song done by Chubby Checker. Ballard’s version had been the B-side of the 1959 release “Teardrops On Your Letter,” when Dick Clark heard it and either arranged for Checker to record it or strongly suggested Philadelphia record label Cameo Parkway have Checker record it. The depth of Clark’s involvement in covering “The Twist” varies according to the source, but he indubitably promoted Checker’s version on his American Bandstand television show, the main source of televised rock music in those pre-MTV days.

In between and after these notable recordings, Hank Ballard and the Midnighters produced a string of solid R&B recordings and inspired and influenced a roster of future pop music stars including a young singer from Georgia named James Brown. After catching Hank and the Midnighters in concert in Greenville, S.C., Brown vowed he’d soon “be onstage doing the very same thing.” [p. 3]

There should be no mistaking the fact that Hank Ballard and the Midnighters were trying to record commercially successful records, as were all of Syd Nathan’s King and Federal label acts. Dahl provides a brief history of the business side of the story. Nathan, arguably the equal of the vaunted Leonard Chess, ran his Cincinnati-based record company as an enthusiastically for-profit business, but he knew his musical stuff. Included on this set is an alternative, more mainstream-friendly version of “Work With Me Annie,” in which the lyric was softened from “Give me all my meat” to “Make it oh so sweet,” but Nathan released the bawdier version anyway even though it meant much less radio exposure. A new book due out this September (Fox, Jon Hartley. King of the Queen City; ISBN: 978025203468; Urbana, Ill. : ­University of Illinois Press) tells Nathan’s story in greater detail and constitutes a valuable reference for this package (and music collections in general).

Perhaps not surprisingly, when other artists tried to record cover versions of the Midnighters’ hits, they strategically changed some of Ballard’s lyrics. Jerry Lee Lewis cut a version of “Sexy Ways” as “Cool, Cool Ways,” but the Killer’s efforts required multiple takes because he kept singing the original lyrics. The bawdy nature of the lyrics in the “Annie” songs and “Sexy Ways” may have inoculated Hank & the Midnighters from a lot of the sales hell inflicted on R&B artists by pop artists covering their works and getting more mainstream airplay and, therefore, sales. It was much more difficult for a Pat Boone, for instance, to convincingly rework lyrics like Ballard’s than to simply cover more innocuous fare (which he did with alacrity). Dahl nicely details these ins and outs of ‘50s airplay and sales strategies and the listening is the better for knowing the context and the risks being taken. Incidentally, Ballard’s toned down self-cover of “Sexy Ways,”—retitled “Cute Little Ways”– is included in this set.

The “Annie” songs inspired a significant reply from Etta James titled “The Wallflower” on the disc, but the chorus revealed its real title as “Roll With Me, Henry.” James’ response was then covered by Georgia Gibbs, whose “Dance With Me Henry” hit the charts in 1955. In turn, the Midnighters answered Etta if not Georgia with “Henry’s Got Flat Feet (Can’t Dance No More),” bringing the Annie cycle to a close. All of Ballard’s Annie songs are included here.

Three versions of “The Twist” are among the 150 tracks included on the set: Ballard’s 1958 demo and the more up-tempo 1959 version, one with an overdubbed buzzing saxophone part and one without. There are also a few “Twist” sequels (“Do You Know How to Twist,” “It’s Twistin’ Time,” “Good Twistin’ Tonight,” and “Miss Twister”) as Ballard, no doubt with encouragement from Nathan, sought to maximize sales while the twist dance craze prevailed. Soon enough, Ballard, with and without the Midnighters, would be recording other dance songs like “The Continental Walk,” “The Float,” “The Coffee Grind,” etc. Dahl wisely devotes a good deal of text to the details of how “The Twist” came into being, but why Nathan never released it as an A-side, despite the song being a big reason he renewed the band’s contract during a time of slow sales in the late-1950s, remains a mystery.

Covering other artists’ hot records was a widespread practice and although Checker’s Dick Clark-endorsed version of “The Twist” arguably cost Ballard a fortune in revenues by outselling it, the Midnighters also indulged in covering other artists’ output from time to time. For instance, they were just one act to cash in on the song “Kansas City.” As Dahl relates in delicious detail, the first Fury Records pressing of “Kansas City” in 1959 credited singer Wilbert Harrison with composing the R&B classic. This was the version of the song that hit #1 on the R&B charts, but Harrison had not composed it, Jerrry Leiber and Mike Stoller had, in 1951; Harrison had simply claimed it as his own. The song bounced from artist to artist and label to label throughout the ‘50s (not unlike dub plates in Jamaica in the 1970s). After Harrison’s version hit big, Little Richard recorded it for Specialty, and King released Ballard and the Midnighters’ version in 1959.

Other hits amongst the set’s 150 tracks include “Look at Little Sister” (which Stevie Ray Vaughan famously reworked), “Daddy’s Little Baby,” “Sugaree,” “Finger Poppin’ Time,” and dozens of other danceable selections, with a very few choice ballads. And two versions of “Santa Claus is Coming” round out this musical gift for all seasons. Overall, this is an exemplary and vital package of first rate 1950s R&B.