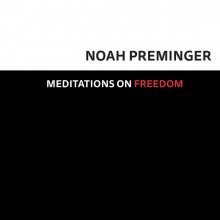 Inauguration day saw a new release from the prolific jazz saxophonist Noah Preminger, aptly entitled Meditations on Freedom. Many Americans have felt confused, afraid, and uncertain in the past few months and Preminger’s newest release channels these sentiments into meditative and provocative music. Composing original tunes and bringing several carefully chosen covers into the studio within weeks of the 2016 U.S. elections, Preminger and company recorded primarily from sketches, eschewing elaborate and polished arrangements for sounds that could touch the still raw nerves of his listeners. The unvarnished sense of the present on this record is heightened by the fact that each of these tracks was recorded live and released with no edits, lending the album the kind of immediacy that a listener may experience at a live set while allowing the musicians to act and react rather than scrubbing the record clean of potentially broken or missed notes. This technique gives this set of tunes a sense of urgency, one that is made even more stark by Preminger’s ensemble choice of a quartet that features no chording instrument, relying solely on melodic counterpoint for harmony. Featuring Preminger on saxophone, Jason Palmer on trumpet, Kim Cass on bass, and Ian Froman on drums, the group’s minimalistic approach ensures that every note counts, as it must with this ensemble and this material.

As the musical and technical choices set this album’s mood, Preminger’s selection of material provides the bulk of the political and social commentary. It is, of course, hard to convey specific social or political statements through instrumental jazz, an abstract medium generally unsuited to convey semantic meaning except through association or allusion.  Many artists try to solve this problem with sweeping titles that appear to convey something that the sound therein cannot.  Preminger’s solution to this problem is to intersperse his original tunes (complete with provocative titles like “We Have a Dream,” “Women’s March,” and “The 99 Percent”) with renditions of familiar socially-conscious numbers.

Perhaps the most interesting thing about the way this group approaches its material is that Preminger and his quartet play the most familiar tunes in the set in a way that makes them seem to unravel as they progress. It would be easy (perhaps even lazy) to note that the quartet’s treatment of these tunes sees them dissipate as it seems that civil society is doing. What actually appears to be happening on these tracks, however, is more sophisticated: what makes these renditions especially salient is not that they actually fall apart, but that they clearly have the potential to. We can hear signature melodies on each of these songs before they morph into nearly unrecognizable improvisation over unfamiliar changes. They usually return to the familiar bits, but in a way that requires the listener to check the liner notes to make sure it’s still the same song.

The first two tracks are covers of songs that address racism in the United States head on: Bob Dylan’s “Only a Pawn in Their Game” (which can be heard below) and Bruce Hornsby’s “Just the Way it Is.” The band performs musical operations on these otherwise familiar tunes—we can recognize the songs in a way but they seem a bit off, almost as though they are being heard underwater. Dylan’s meandering vocal melody appears while the chords under it move in unexpected ways; the signature piano intro on the Hornsby tune is played by the horns before the quartet departs in a different direction than Hornsby could likely have imagined. It appears that Preminger meditates on freedom by pondering the perilous position of hard-won liberties—a house of cards that, like these songs, could easily fall apart with one wrong move. This thesis is supported by the tenuous feeling throughout the record—even the original tunes are not readily hummable, but melodically evanescent. The album feels transient, listening to it an absorbing meditation which is gone as soon as the final seconds tick off of the last track.

With Meditations on Freedom, Preminger and company have released an immediate artistic statement that packs quite a punch in a time that may be optimistically characterized as uncertain. Any flaws that may be found in the album’s one-and-done production style mirror the flaws that Preminger and company appear to highlight in democracy itself, full of promise but ultimately ambiguous in result. There are no shout choruses, no moments of divine Charlie Parker transcendence, but instead a preponderance of more muted soul-searching.

It is critical to note that this record does not end on a bright note—a fairly sunny reading of George Harrison’s “Give Me Love” is followed by an original, “Broken Treaties,” that reads as a lament for all of the hard fought battles that may have now been lost. Preminger’s music will likely not inspire revolution; rather it seems to grieve a failed one. Even the album’s gorgeous version of Sam Cooke’s “A Change is Gonna Come” is tinged with loss—sure, a change is gonna come, but will it be a good one?  It is difficult to interpret many of these numbers as seeing the glass half-full, and that may be precisely the point.

The most challenging part of Meditations on Freedom is its clearly articulated and profound sense of loss. Preminger and company’s skill at articulating this in a musically cogent way is what ultimately makes this album both so good and such a downer.