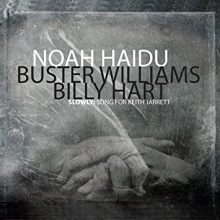 An emotional concert by Keith Jarrett at Carnegie Hall on February 15, 2017, became a pivotal moment in pianist-composer Noah Haidu’s trajectory. No one in the audience could have predicted that they were witnessing the final performance of the legendary jazz pianist, who later suffered a pair of debilitating strokes that forced his retirement. Haidu decided to change the focus of his planned trio album with jazz elders Buster Williams (bass) and Billy Hart (drums), resulting in Slowly: Song for Keith Jarrett. Set to release the day before Jarrett’s 76th birthday, the tribute album focuses on original compositions by Haidu, Williams and Hart that give a nod to the musical interactions of the famed Jarrett/DeJohnette/Peacock trio without trying to recreate or interpret performances of the past.

The centerpiece of the album consists of two songs composed by Haidu, including the title track “Slowly” for solo piano that’s dedicated to Jarrett’s unique playing style, and the pairing of Jarrett’s “Rainbow” with Haidu’s “Keith Jarrett” in a 12-minute medley that shifts from elegant melodic lines to rhythmically complex, rock tinged riffs. The opening track, “Air Dancing,” is a Williams original which aptly describes the softly, shimmering work punctuated by gentle brushes on the cymbal. Hart offers the lush “Duchess” and “Lorca,” and the remainder of the album is devoted to standards, including an intricate rendition of “What a Difference a Day Makes,” a slowly unfolding “Georgia,” and the elegant closing track “But Beautiful” that fades out with a whisper.