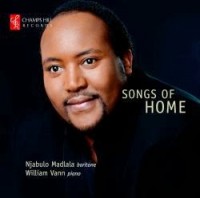 Born in a South African township, Njabulo Madlala was raised by his mother and grandmother. In the forward to his debut album, Songs of Home, he thanks these two women for raising him in a home filled with music and love. Madlala received a number of grants and awards, enabling him to attend the Guildhall School of Music and Drama in London and the Welsh Cardiff International Academy of Voice, and complete his Masters of Music degree.

On Songs of Home, Madlala combines songs from the Western art music tradition with Zulu and Xhosa songs from South Africa, as well as an African American spiritual. Madlala did not separate these songs by tradition on the album, but rather intersperses the different genres. For example, “King David,” a contemporary English composition, is proceeded by the African American spiritual “Deep River,” and then the Xhosa tongue twister, “Baxabene Oxamu.” Madlala shapes this album as a reflection of his musical and personal experiences. He says that “Songs of Home is a reflection of a journey from the townships of South Africa to the world of classical music and song . . . a life’s journey without boundaries” (see foreward in liner notes). Accompanied on piano by William Vann, Madlala displays his impactful voice in German lieder, including “Belsazar” by Robert Schumann. He also applies his Western classical vocal training to the songs that he was raised with in South Africa, such as “Thula Sizwe” (Be Still My Country) and “Thula Baba…Thula Sana” (Hush, sleep my little baby). The two partially a capella tracks, “Baxabene Oxamu” and “Qongqothwane,” display a unique blend of Madlala’s South African and Western vocal styles. On “Shosholoza,” a song typically sung by a choir or a large group of people, Madlala imitates the chorus-solo call and response style  with the piano acting as the choir.

From South Africa to London, Njabulo Madlala’s musical experiences across the world are reflected in Songs of Home. Audiences can expect to hear diverse styles of music and a unique blend of genres, languages, and cultures.