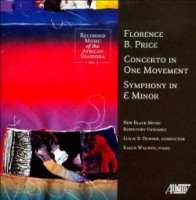 Title: Florence B. Price: Concerto in One Movement & Symphony in E Minor

Although you wouldn’t know it from the scarce recordings of the works of Florence B. Price (1888–1953), she stood alongside William Grant Still, Hall Johnson, and William Dawson in an elite group of African American composers active early in the twentieth century. The Chicago Symphony Orchestra premiered her Symphony in E Minor in 1933; she won major compositional prizes; she was proudly cited by the Black press and favorably reviewed by the Chicago Tribune; and her arranged spirituals were sung by Roland Hayes and Marian Anderson. Although southern-born, Price studied at the New England Conservatory and moved to Chicago in 1927 to teach and write. Like other composers impelled by what Samuel Floyd identified as a broad “Negro Renaissance” ethos that flourished in Harlem and Chicago, Price produced nationalistic works that melded Western classical composition techniques with Black musical idioms.

Price’s relatively conservative neoromanticism marks these pieces, with their lush orchestral textures, standard forms, lyrical melodies, and tonal harmonies shot through with rich chromaticism. Their real innovativeness hinges on the incorporation of Black musical traditions: for instance, both pieces draw on the antebellum folk dance tradition of “pattin’ juba.” Additionally, while neither work quotes a spiritual or uses the 12-bar blues, a mournfulness sometimes associated with those genres permeates the symphony’s second movement and the concerto’s middle section (although in one movement, the piece contains three discrete sections that map onto the standard three-movement concerto form).

Also quite neoromantic is the virtuosity of the Concerto’s piano part, which the composer played at its 1934 debut and which is ably and clearly performed here by Karen Walwyn. With Rachmaninoff-like keyboard figuration and textures, the piece announces its aesthetic intentions immediately with a minor, blues-inflected descending motif voiced in call-and-response between brass and winds. The lyrical middle section and dancing final section give a cinematic quality to the 18-minute work as it traverses multiple moods. The current album represents the piece’s first recording, a labor of imagination and research. As Horace J. Maxile, Jr., explains in his liner notes, no copies of the orchestral part of the Concerto are extant. What is heard here is a reconstruction of the instrumentation by composer Trevor Weston, drawn from Price’s manuscript sources.

The tale of lost or overlooked works has marked Price’s legacy; many of her compositions, including the two on this album, were never published. Although the Symphony in E Minor marked the first time a major orchestra played music by a Black female composer, the current album is only the second recording of the work. This is unfortunate, since the symphony’s second movement is the high point of both the piece and the album. Built around a lyrical, chorale-like tune in the brass that alternates with other musical episodes, the movement concludes with chimes and a soaring tutti that reinforce its sacred sensibilities. The Center for Black Music Research in Chicago, the force behind this album, is to be thanked for re-introducing Price’s music with this high-quality recording and its detailed liner notes containing biographical data and stylistic descriptions.