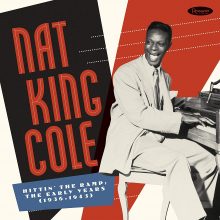 I could open this review with a clinical statement: This set presents virtually all of Nat Cole’s earliest recordings prior to his long association with Capitol Records, a relationship that provided the foundation to establish his wide recognition as one of the most important vocalists in the tradition of the Great American Songbook. Yet, I prefer a more emotionally connected view: Hittin’ the Ramp presents Nat King Cole’s earliest recordings, showing how he discovered, step by step, a pathway that permitted his remarkable talents to be heard and loved by a worldwide audience. Both views are correct, but only the second reflects the challenges a talented African American artist faced in building a reputation and, with it, the economic base necessary to support a sustainable full time career during the WWII era.

The majority of the recordings in this new box set are taken from 16” radio transcription discs that were sold on a subscription basis to radio stations that, at the time, were prohibited from playing commercial records. The stations needed to fill airtime in ways that attracted and entertained their listeners. Many of these performances featured nonsensical novelty tunes, where composer royalties and associated rights added minimal production costs, making the transcriptions more affordable to the radio stations than other programming options.  Nat Cole skillfully elevates each of these novelties while leading his trio’s vocal harmonization and adding brief piano solos and delightful piano accompaniments. You can hear that Cole deserved to be known as a star, even though he was not yet broadly recognized by the public for his artistry. This set also includes Cole’s commercially issued 78s from 1936-1943 along with some wonderful new discoveries.

As you listen to these performances, you hear how Cole persisted, even when he was relegated to backing several forgettable vocalists and vocal groups, before producers finally returned their focus to his trio. Throughout this period, Cole’s reputation continued to grow, supported by these recordings and his growing public engagements. Hittin’ the Ramp assembles a nearly complete collection of tunes Cole recorded prior to his relationship with Capitol Records. The only exceptions are two 1940 Lionel Hampton sessions recorded for RCA Victor.*

Taken as a whole, the recordings in this wonderful box set from Resonance Records document Cole’s voyage from a virtually unknown artist to early stardom. It is, frankly, an inspirational joy to listen to his remarkable artistry and to indirectly witness the development of his early career. The recordings are musically enjoyable as well, providing ample rewards to those who indirectly participate in this journey by investing in this remarkable and highly recommended collection.

So, what are some notable highlights in this collection?  There are far too many to mention, so I chose to single out four specific milestones. These begin with Nat’s earliest recording, “Honey Hush,” made for Decca Records in 1936 with Eddie Cole’s Solid Swingers (Eddie was Nat’s older brother), where Nat takes a short melodic solo and provides a solid rhythmic foundation for the ensemble. This Decca session captures an early preview of Nat’s considerable talent, but didn’t attract much attention at the time. Three versions of “Honey Hush” are included—two Decca takes and a 1940 transcription.

A bit over two years later, in 1938, the Nat King Cole Trio began a three year relationship with Standard Transcriptions. The first three sessions were issued as performances by the Nat King Cole Trio and feature close vocal harmonies with tightly integrated instrumental choruses that set the foundation for the jazz piano/guitar/bass trios that would follow. Nat’s voice is easily recognized as he leads the vocal trio. Many of the song titles are not widely recognized today but were recorded by other artists at the time. Among them are three instrumental performances—“Don’t Blame Me,” “Liza,” and “Caravan”—that more directly foreshadow Nat’s role as a piano soloist as he leads both rhythmic and harmonic variations throughout these performances.  But you need to be patient, since three of the next four transcription sessions feature rather forgettable vocalists.

Cole’s role as a recognized lead vocalist emerged in a major way in 1939 during a Standard session when he sang “Sweet Lorraine.” The vocal portion foreshadows his later, very popular 1943 recording for Capitol Records and the earlier, lesser known Decca recording from 1940. Both of these earlier recordings are included in this set, along with an alternate take.

Cole’s position as a featured jazz pianist clearly emerged during his relationship with promoter Norman Granz and the Jazz at the Philharmonic tours that began in 1944. Prior to these tours, Cole backed Lester Young in 1942 for Granz’s Philo Records and four of these tracks are included. At the time, Young was extending his role beyond his recordings with Count Basie, including notable work with Billie Holiday and others. On a side note, the same 1939 session that produced Cole’s first recording of “Sweet Lorraine” also included an instrumental performance of “Rosetta” that became a staple in his later JATP concerts. Once again, the seeds of Cole’s stardom make an appearance.

As Cole’s career advanced, some jazz fans began to compare him to another wonderful pianist, Oscar Peterson.  In some early performances, Peterson also sang, and he even recorded an entire LP of vocals for Granz’s Verve Records in 1953. That led to a fabled promise Oscar made to Nat, namely that he would stop singing if Cole stopped playing the piano. That may have accelerated Cole’s transition to world famous vocalist and key contributor to the American Song Book tradition. Cole’s relationship with Oscar Peterson and Norman Granz were highlighted in one of the weekly 1957 episodes of Nat Cole’s network television program that was cancelled after one season by NBC (Cole remarked that network executives and sponsors were “afraid of the dark”). There are two remarkable clips from the program on YouTube: Cole’s piano feature on “I Want to Be Happy,” introduced by Norman Granz’s celebration of Nat’s career, and his performance of “Sweet Lorraine” accompanied by the Oscar Peterson Trio which used Cole’s signature piano, bass, and drums format.

For the historical completest, this collection is highly recommended since it presents a few previously unissued recordings amidst the body of Nat Cole’s early recordings, while also providing a definitive documentation of his early career. For those who enjoy studying the chronological development of a major artist, this set provides an exceptional example of how unique artistry can be developed to support a sustainable career. For those who may be more casual listeners and simply enjoy listening to good music performed at the highest level, Hittin’ the Ramp will bring you many hours of listening enjoyment.

Resonance Records deserves our thanks for producing this remarkable collection filled with wonderful, joyous music. The excellent production values and sound quality reflect the label’s ongoing commitment to release unique recordings by important artists.  A complete track list which identifies sources can be found here.

* For those wanting more, the complete Capitol recordings by Cole’s trio were released in an 18 CD collection from Mosaic Records, out-of-print for many years but still available at collector’s prices and as digital downloads from various sources.