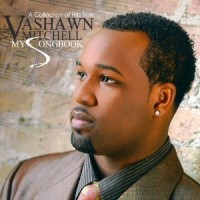 Indianapolis label Tyscot Records recently released My Songbook, a collection of songs composed by VaShawn Mitchell that celebrates his illustrious career (he just received 10 Stellar Award nominations for his 2010 album Triumphant).  Mitchell, having worked with church music since he was barely a teenager in Chicago, has become a nationally recognized gospel singer and songwriter. He has composed songs for many notable gospel singers including Smokie Norful, Bishop Paul Morton, and Bishop Larry D. Trotter. This collection includes 14 songs from his previous albums such as Believe in Your Dreams (2005) and Promises (2007).  Also added to this special compilation are songs such as “Only a Test,” which has been sung in church worship services nationwide, as well as the unreleased track “God Cares For You” and a new remix of “Don’t Last.”

The companion DVD offers a 70 minute live performance of Mitchell and his band at Chicago’s Apollo Theater in 2007. Featuring songs from his album Promises, the concert footage illustrates Mitchell’s singing talents and the power of his music.  Mitchell and his band create a great musical worship experience in the space, performing encouragement songs with grooves such as “Crazy Praise,” “For My Good,” “Don’t Last,” and “Able,” in addition to the soothing ballads “Promises” and “I Worship You,”  plus “Favor (Ain’t Fair)” which is available only on the DVD.

Following is the 2007 performance of “For My Good” (courtesy of Tyscot Records):

Guest singers on this project are Angie Spivey, Kim Burrell, and Bishop Larry D. Trotter, who contribute their interpretations of Mitchell’s compositions and pay their respects to his music.  Mitchell’s compositions show both traditional and contemporary gospel flavors, and they are made for the worship and encouragement of congregations and listeners.  The songs gathered for this compilation create a total praise experience and reconfirm Mitchell’s songwriting gift.