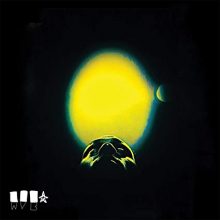 The Cleveland, Ohio-based funk and soul collective Mourning [A] BLKstar is a “multi-generational, gender and genre non-conforming amalgam of Black Culture dedicated to servicing the stories and songs of the apocalyptic diaspora.” Boldly confronting themes of racism, oppression, and injustice, the group’s albums reflect the reality of living in a world that is all too frequently hostile to people of color. Their previous release, The Garner Poems (2018), was a eulogy to Eric Garner and the many other victims of police brutality past and present. M[A]B’s new double album, The Cycle, is yet another epic and thought-provoking addition to the group’s catalog. Set as an 18 movement song cycle featuring vocalists James Longs, Kyle Kidd and LaToya Kent, the group envisions the work as “a humble addition to the long legacy of James Baldwin’s adage of the artist as witness.”

The Cycle developed organically as band members embellished upon sketches provided by music director and keyboardist RA Washington. Within days, the final version was recorded live in their practice space, capturing the ambiance of the old storefront in southwest Cleveland with wood floors and tin ceilings. Each track is drenched in gritty hip hop production techniques that add a level of gravity through percussion loops, distortion and rumble, which are then enhanced by the band featuring Theresa May (trumpet), William Washington (trombone), Peter Saudek (guitar) and Dante Foley (percussion).

One of the highlights of the album is “Mist :: Missed,” featuring the horns and LaToya in a call and response as she sings, “Folks don’t care what they say, its like they play different games /  Chasing after hours, while our people are slaughtered.” Using an ostinato emulating the grinding wheels of oppression, “The Wants” perfectly captures the anxiety of “people struggling while they live in fear” with LaToya repeatedly wailing the closing refrain, “They want to get over.” A similar approach is taken on “Something JD Said,” with Latoya despondently bearing witness to a country “where delusion is your master, the dollar is the will and your self-hatred be chains” over the menacing sound of sirens and stomping boots.

“Devil Get Behind Me” begins with an excerpt from a speech given by 21-year-old Black Panther leader Fred Hampton just prior to his assassination by the FBI and Chicago Police in 1969. The song that follows pays tribute to Hampton as the vocalists sing, “travel down the path with me, ’cause I don’t want to lose if the world ain’t changing / fear, fear, say my name.”

Concluding with the anthemic “Four Days,” LaToya gives another powerful performance, stretching the limits of her considerable vocal range as she sings about a destructive love: “Four days ago, I saw my heart resting in a field / the field was empty, except the glass,” while the chorus responds in a whisper, “wake up, wake up, wake up.”

The Cycle is a very dark and compelling album that digs deep into the current zeitgeist while occasionally offering glimmers of hope for a better future. Speaking truth to power through their music, Mourning [A] BLKstar offer yet another soul shattering performance.