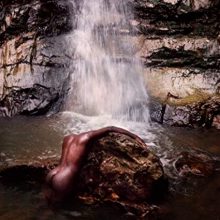 Singer-songwriter and producer Moses Sumney has dropped his second studio album, Grae, a generous double album released in two parts covering 20 tracks. Back in 2017, Sumney’s previous groundbreaking, genre-less album Aromanticism was well-received, but saw the musician widely labelled as an R&B artist – much to his dismay. He recently said in an interview: “People always look to define you to understand you, but my identity is this kind of patchwork. It’s not something that can be – or that I want to be – defined.” And now with his second project, Sumney places a great emphasis on this message and his artistic vision.

According to the official press release, “to try to pin Sumney down on a sound – and really, on any matter – is to end up with a hand full of fog,” but his genius is never allowing the set to sound incongruous. The songs on Grae may be divergent, like the visceral, yet gentle “Virile” and the intoxicated, outro jazz of “Gagarin.” There’s the provocative, ambiguous bop of “Cut Me” countered with the sweeping, amphitheater-ready “Bless Me.” But Sumney’s distinct and cutting voice is the ever-present link, threading all of these pieces together. It all works to create a paradox, keeping art and artist somewhere between any one sure thing – but surely something that demands your attention. The first half of the album is full of angst, anger, and lustful energy, while the second half evokes a sense of peace or understanding, accepting the multiple facets of himself while entreating others to do the same.

A wide range of artists contributed to the album, including Jill Scott who is featured on the song “jack/jill,” as well as guest appearances by bassist Thundercat, jazz harpist Brandee Younger, jazz saxophonist Shabaka Hutching, multi-instrumentalist FKJ, kora player Tunde Jegede, and electronic musician Daniel Lopatin, among others. Sumney, in addition to vocals, enriches the mix on keyboards, guitar, bass, percussion, synthesizers, and saxophone and flute arrangements. Clearly his talents have no bounds.

By presenting Grae in two parts, Sumney attempts to create “a “grey” in-between space for listeners to absorb and consider the art” as he weaves together songs and spoken word segments into an engaging and wholly unique musical experience.