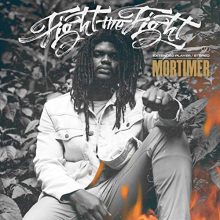 Kingston, Jamaica native Mortimer’s Fight the Fight has already made a splash in the reggae world, debuting at #3 on the Billboard Reggae Chart and at #1 on the iTunes Reggae Chart. The six track EP, made in collaboration with Grammy-nominated producer Winta James, is a masterpiece of live musicianship featuring top-notch production and emotive lyricism.

The socially conscious and uplifting title track, “Fight The Fight,” is inspired by Bob Marley and the Wailers, highlighting Mortimer’s Rastafarian spirit and admiration of the legendary reggae musicians. The most popular song on the EP, however, is “Lightning,” a reggae love song with a modern twist. Released in July, the song quickly became a summer anthem, with the single now reaching over 3.5 million views on Youtube. Other songs like “Misery” and “Style & Grace” are more melancholy but clearly convey the soulful essence of Mortimer’s music.

With smooth rhythms, evocative vocals, and influence from reggae greats like Bob Marley, Fight The Fight is a must-listen for any reggae fan. Mortimer succeeds in capturing the very heart of reggae in his debut release.