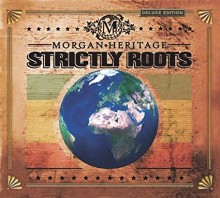 Family acts in music have always been huge: The Osmonds, Sylvers, Five Stairsteps, Isleys, Carpenters, and of course The Jackson 5/The Jacksons—who recently marked their 50th anniversary. Morgan Heritage is a family act and I’m willing to bet that you’ve never heard of the group. MH is Jamaica’s answer to the J5. Made up a five siblings, their father is reggae singer Denroy Morgan, who had a big hit in 1981 with the single “I’ll Do Anything.”

First released in 2015, Strictly Roots is the band’s 10th studio album and the first on their own label CTBC, which stands for Cool To Be Conscious (they recorded for the label VP during much of their success, but felt it was time to move on). After winning a Grammy Award in the Best Reggae Album category in 2016, the group decided to release a 2-CD deluxe edition, which celebrates the album’s success with previously unreleased tracks and remixes.

The original album (Disc 1) was comprised of twelve tracks in which Morgan Heritage takes the listener through peaks and valleys. In the song “So Amazing,” Morgan Heritage steps away from traditional roots and goes for a more top 40 sound. “So Amazing” could easily be played on a CW series:

In reggae, one always pay homage to Jah and Morgan Heritage sticks with tradition. In “Child of Jah” (feat. Chronixx) they explain the part Jah plays in reggae music and rastas to those who don’t know. On “Light It Up,” featuring Jo Messa Marley, they chant “this is reggae music.” Can’t do reggae without a Marley. After all, Robert Nesta Marley is the godfather of reggae. “Rise and Fall,” which discusses the cycle of life, has the typical drum & bass sound you hear in reggae.

Disc 2 includes 3 additional versions of “Light It Up,” plus the pop-oriented “Come Fly” featuring the Celtic punk band Flogging Molly and the more traditional “Lion Order,” among others.

Morgan Heritage has won respect from the reggae community worldwide. Now that they are independent on CTBC, I expect them to take some risks and open it up. After all, they’re royalty. One Love.