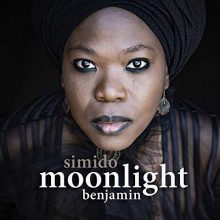 On Simido, Benjamin is backed by her longtime collaborator, French jazz-rock guitarist and arranger, Matthis Pascaud, along with guitarist Matthieu Vial-Collet, bassist Quentin Rochas, and drummer Bertrand Noël. During the past two years of intensive touring, the band forged their guitar-laden, fuzzed up sound while Benjamin focused her songwriting on her “hopes and fears for Haitian people who have endured so many challenges in recent times.” Opening with the lead single “Nap Chape,” Benjamin denounces Haiti’s ruling classes and their oppression of the people, questioning their state of inaction and misunderstanding. Demanding answers in a strident and emotion packed voice, she asks “sa n’ap tann?” (what do you wait?), “sa’n konprann” (what do you understand?), and “kwè n’ap chape?? (do you think the will people get by?).

The album’s title track, “Simido,” is a mid-tempo song of hope, while the passionate rocker “Pasay” summons help from the spirits to deliver Haitians from their current situation. Though most of the tracks are uptempo hard rocking songs with a danceable beat, the band digs deep into a slower groove on “Belekou,” rendering a darker sound that seems to plumbs the depths of the psyche. Closing with “Kafou,” Benjamin pays tribute to a major Haitian spirit, also known as the master of crossroads, in a reference to voodoo culture. Incorporating a much more complex rhythmic structure, this track more than any other thoroughly embraces Moonlight Benjamin’s Afro-Caribbean roots.

Simido is another mesmerizing release from Moonlight Benjamin that successfully fuses her spirituality and love of Haitian culture over a bed of blazing rock guitars.