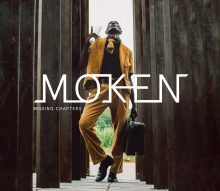 When Cameroonian-born artist Moken released his debut album, Chapters of My Life (2016), he sought to capture the tumultuous experience of moving to the U.S. in the jazzy, rhythmic style of Cameroonian makossa music. Three years later Moken, who is now based in Atlanta, has compiled both new and reworked songs he felt were missing from his first album in the aptly titled Missing Chapters. Drawing upon a close circle of Atlanta musicians and other friends, including drummer Raphael Periera and violinist/flutist Marla Feeney, Moken offers what he calls “a feelings album,” as in “whatever felt right, we kept it.”

Missing Chapters, like his debut release, highlights Moken’s extremely unique voice, ranging from a deep, baritone to a warbling falsetto. The first track written for this companion release was “Mi Amor,” a song dedicated to Moken’s future wife that was written on the ngoni, a harp-like instrument originating in West Africa. Moken draws heavily on African influences throughout, especially in “Retro Africa,” which honors some of the continent’s brightest musical stars. For fans of Moken’s distinctive vocals, Missing Chapters is a great follow-up to Chapters of My Life and continues to honor and embrace the artist’s Cameroonian roots.