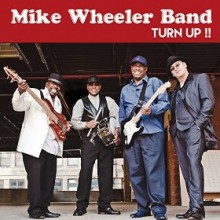 One of the busiest guitarists in Chicago, Mike Wheeler has an impressive resume, having played with such luminaries as Demetria Taylor, Nellie Travis, and Big James and the Chicago Playboys.  Serving as leader on his sophomore Delmark release, Turn Up!!, Wheeler leads his band through a sizzling 13 song set, full of tight arrangements and satisfying grooves.

Most of the material on Turn Up!! is straight-ahead blues. Numbers such as “Sweet Girl” showcase the band’s hard-earned solid groove, doubtless acquired over countless evenings working with similar funky blues numbers. However, this release isn’t an entirely tourist-in-the-city-for-the-weekend affair.  “Brand New Cadillac,” for instance, is built around heavy layered guitar riffs that wouldn’t have been out of place during Black Sabbath’s early days, with a stylish guitar solo to match.

While Wheeler is a solid singer and songwriter, the real stars of this record are the band’s chops and grooves.  The band dips into funky R&B on “Yeah!,” with bassist Larry Williams and Wheeler dropping in with solid and funky solos.  The band also excels at the slow burn, as on “Nothing Lasts Forever.” Their cover of Little Milton’s “That’s What Love Will Make You Do” grooves hard, with solo breaks for Wheeler and Williams, who plays slap-bass bebop that lays deep in the funk groove. “Sad State of the World” provides another opportunity for soloing, as the nearly 8 minute long tune, heavily orchestrated in the style of The Band, gives Wheeler an opportunity to burn, even if—like many gestures at social commentary from musicians who don’t do it all the time—the lyrics are maudlin at best.

Overall, Turn Up!! Is a solid musical statement from a group of Chicago heavyweights.  Blues fans must check this out, and blues guitarists will want to cop some of Wheeler’s tasteful and flawlessly executed licks.