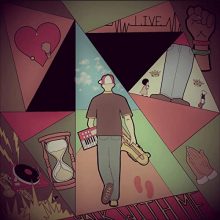 A native of Jackson, Mississippi, saxophonist Michael Burton‘s affinity for music was nurtured at an early age by his mother, a singer with the Mississippi Mass Choir, and father, a tenor saxophonist. Burton honed his craft at Indiana University’s Jacobs School of Music under the tutelage of the renowned David Baker, and as a member of the IU Soul Revue, an ensemble that examines and performs Black popular music. Since completing his master’s degree in Jazz Studies, Burton has toured with major artists ranging from Mary J. Blige, Jill Scott, Patti LaBelle and Anita Baker to New Edition, PJ Morton, and blues singer Willie Clayton. He has also played keyboards and saxophone on many of Tyler Perry’s stage and film productions. Burton’s vast experience is reflected in his third studio album, Walk With Me. Co-produced by Burton and Atlanta-based multi-instrumentalist Jelani Jackson, the album features collaborations from artists such as PJ Morton, Sho Baraka, Jeff Bradshaw, Melvin Jones, Len’i McKinney and Paula Champion.

Released during a time of civil unrest and political hegemonic disruption, Burton and his collaborators speak to these issues by using encouraging lyrical content and “feel good” melodies, creating their own genre blending “revolution sound.” The opening track, “War & Thunder,” features a tight horn section and a hip hop meets marching band beat. Burton, along with Christian rapper Sho Baraka and trombonist Jeff Bradshaw, puts forth the declaration “this is war, this is thunder, please alert the crowd.” The song urges people to not be ashamed of self-identity despite the “lies” and covert language used to oppress them. This declaration comes during a heightened moment in American history when Black people are arguing for their humanity. While many of their sons and daughters are being laid out in the streets by officers of the law, those same officers are continuously justified for breaking the laws they claim to protect. It would seem “the more things change, the more they stay the same.”

Burton remains hopeful through his faith in God, encouraging listeners on the track “Pray” to please pray over the issues happening around the world. He further expresses his faith and belief in prayer in the “SoapBox (Interlude),” singing: “Hopefully America can write wrongs, prayerfully / Because where would we be without God? Nowhere / Heaven, I’m trying to go there.” The tone of this song seems to express Burton’s fatigue from all of the civil unrest in America, yet his faith helps him to believe things will get better. How they will get better and when are still in question.

Following is the driving mid-tempo groove, “This is What Happens,” an encouraging song that brightens the mood of the album and brings social consciousness to the party. Featured rapper and co-writer Len’i McKinney lays down bars, speaking words of wisdom: “The storm is not the same but the eye has never changed, our peace remains the same, something stronger than sight.” She encourages listeners to have a sense of freedom and tranquility in the middle of civil and environmental unrest, and to “take a few steps back and read and relax.” In other words, take a moment to actually think about and understand what is happening in and outside of our own world, and to realize “the whole wide world was two checks away from being flat on its back.” The latter, of course, refers to the physical, economic and political effects of the COVID-19 pandemic.

On the original title track “Walk With Me,” Burton asks the Lord to lead us and help us to figure out where we go from this place of wrath and tears, as a nation and global community, singing: “I can’t do this on my own, sometimes I feel like I’m alone, so I need you to walk with me.” This song is somewhat reminiscent of the spiritual “I Want Jesus to Walk With Me” which includes  the refrain, “All along my pilgrim journey, Lord, I want Jesus to walk with me.”

Without question, Walk With Me is a timely album given our current environment, and Burton’s response to world affairs offers hope and encouragement. After all, it won’t be “War & Thunder” forever.