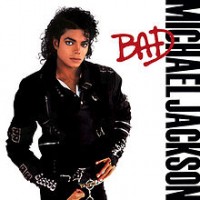 Three years ago Sony Legacy released a limited edition CD/DVD to celebrate the 25th anniversary of Thriller.  Now Legacy has upped the ante with Bad 25, a 4 disc deluxe edition celebrating the silver anniversary of MJ’s 1987 follow up album. Included in the box set is a remastered edition of Bad, a disc of previously unreleased Bad demos recorded in Michael’s personal studio at Hayvenhurst, the DVD Live at Wembly July 16, 1988, and a CD from the same live performance, culled from the multi-track audio recorded by the sound truck.  Accompanying the discs are two illustrated booklets featuring full-color tour and session photos, a double-sided poster, and a Bad 25 decal.

For many, the biggest draw of the set will be the DVD (also sold separately). Though a video of live performances from the Dangerous tour was issued in 2005, no live footage from the record breaking 14-month-long BAD tour has been officially released until now. The concert at London’s Wembley Stadium took place almost one year into the tour, and by this time MJ and the band are a super tight, extremely well choreographed ensemble, yet they still display plenty of spontaneity. Music director/keyboard player Greg Phillinganes is especially fun to watch, as is lead guitarist Jennifer Batten, bass player Don Boyette, and a tight-skirted, permed Sheryl Crow in her breakout gig as one of MJ’s backup singers. Prince Charles and the late Princess Diana also make a brief cameo appearance at beginning of the concert. The DVD was sourced from Jackson’s personal copy of the performance as shown on the JumboTrons during the concert, which apparently were archived on S-VHS tapes.  Consequently, the picture is far from HD quality, but the camera work is exceptionally well done with plenty of close-ups of MJ, who displays a level of physical and emotional intensity that few singers can equal.

Any Michael Jackson fan will likely want to own this set, and the younger generation who came of age during MJ’s final years should take this opportunity to experience the performer when he was truly on top of the world.