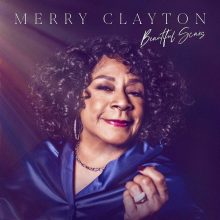 Vocal legend Merry Clayton embodies the true essence of the words resilience and fortitude. The Grammy Award-winning artist has made a return to her southern Baptist gospel roots with her new album, Beautiful Scars. Co-produced by Rock & Roll Hall of Famer Lou Adler and Grammy Award-winning songwriter, vocalist and instrumentalist Terry Young, Beautiful Scars is a testimony of the hardship that Clayton has endured over her lifetime and in recent years. In 2014, she survived a tragic accident but unfortunately her doctors were forced to amputate both of her legs. In the eye of this storm, when doctors told Clayton she would have to lose her legs, she began to sing. Drawing form the strength of her ancestors and giving praise to God, she persevered despite the new challenges that she would face.

The idea for the album was born after a conversation Clayton had with Adler while she was in the hospital. Clayton told Adler, “I’ve been through the fire and the rain, but I made it through…I want people to know that there is healing and deliverance through anything. But you’ve got to trust God. Put yourself in His hands.” Adler responded, “That’s all I needed to hear. We’ve got to get you some songs!”

One of the featured singles on the album is a chilling cover of Sam Cooke’s “Touch the Hem of His Garment,” where Clayton is accompanied by a “doo wop” chorus and a solo recorded by her late husband, saxophonist Curtis Amy, who she lost in 2002. Another highlight is “Deliverance,” written by Terry Young. This song is a reflection of the conversion that Clayton had with Adler about wanting people to know that healing and deliverance are yours if you claim them.

Merry Clayton’s testimony has touched so many people and through Beautiful Scars, millions more will be inspired by the life of this amazing, loving and courageous woman.