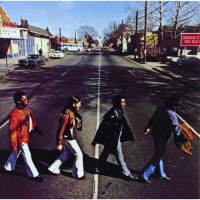 The Beatles’ 1969 swan song, Abbey Road, had a profound effect on a lot of people around the world. One of them was Booker T. Jones, the long-time keyboard player and songwriter for Stax Records and leader of the hit-making instrumental group The M.G.’s.  When Abbey Road hit U.S. record stores, in September 1969, Jones had just relocated to Los Angeles.  According to Ashley Kahn’s liner notes for this excellent reissue CD, Jones bought the album at the original Tower Records store, and as he told Kahn, “went home, sat down with it and went ‘Oh my God! What is this – is it a rock and roll album? … I knew right away it was a landmark album for rock and roll and for the music business.”

To stun a musician of Jones’ caliber is a real feat, and the Beatles so bowled him over that he set about to record a cover and interpretation of the songs on Abbey Road, topping it off with a tribute cover showing Booker T. and the M.G.’s crossing McLemore Avenue in front of the Stax recording studio in Memphis.

Of all the fantastic M.G.’s albums, this one is the most purely musical and thus the most joyful.  At heart, the happiest place for Jones, guitarist Steve Cropper, bassist Donald “Duck” Dunn and drummer Al Jackson Jr. was in the embrace of music, making music together. After years of creating, playing on and producing tightly-wound soul hits, the boys now had the opportunity to stretch out and show their chops. And they hit every note and downbeat perfectly.  This album has been in print almost every day since it was released.  Concord Music Group’s latest reissue sounds the best of all issues I’ve heard, and the new bonus tracks justify the purchase in and of themselves.

Jones and the M.G.’s put their own stamp on the Beatles’ songs, altering the sequence and leaving some Abbey Road tracks off their album.  They focused on the long medleys of snippet-songs on side 2 of the Beatles record, and also integrated the then-new Moog synthesizer into their covers just as the Beatles had added Moog tracks to some of the original songs.  But overall, the big differentiator in the M.G.’s album is its funkiness―they never depart from their Memphis soul roots. Instead, they bring Liverpool to Memphis and respectfully host and interact with their guests, as exemplified on “You Never Give Me Your Money.”

The bonus tracks are all covers of Beatles tunes from various other M.G.’s albums. They vary in sound quality, as they were recorded at various times and with various levels of technology advancement at Stax Studio.  The final track on the album is an alternate take of “You Can’t Do That,” which should have been left in the dustbin, but that’s a minor quibble.

Joe Tarantino’s 24-bit remastering is worth special mention.  This CD is probably as close to the original master tapes as a mass medium is likely to get.  By 1969, the two studios where McLemore Avenue was recorded―Stax in Memphis and Wally Heider in Los Angeles―were capable of excellent sound productions, and this album is well recorded and well mixed.  Previous CD reissues have not brought out the details and punch that were captured on tape.

Perhaps the best news is that this reissue is just the beginning of Concord’s Stax Remasters series. Here’s looking forward to more excellent-sounding reissues from this goldmine of great soul music.