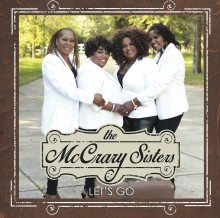 The McCrary Sisters (Ann, Deborah, Regina and Alfreda) are the daughters of the late Rev. Samuel McCrary, one of the founding members of The Fairfield Four, the famed and fabulous quartet dedicated exclusively to the performance of traditional gospel. Their talent is grounded in the musical grooming they received in their family. Mike Tash, writing about the four sisters, indicates that for them, “music is a birthright, a lifelong love affair, a sometimes career, an indescribable joy, and occasionally, a cross to bear.” While their musical virtuosity initially led them individually to work with different artists, they eventually came together as the “McCrary Sisters” in 2011, each bringing “a unique energy and virtuosity to the group [as well as] varied experiences within the worlds of pop, rock, R&B and gospel music,” as Amy Sciarretto indicates.

Their new album, Let’s Go, which blends traditional and contemporary gospel music, was produced by Nashville-based singer/songwriter and musician Buddy Miller, who is featured prominently on guitar, along with other Nashville session musicians. Andy Argyrakis notes: “while there are contemporary aspects within this set of rootsy gospel romps… these four daughters of Fairfield Four tenor Rev. Samuel McCrary also cling tightly to tradition, especially when it comes to lyrics that edify and uplift.”  Regina narrates the story in an interview with Chuck Dauphin: “When Buddy Miller agreed to produce the CD for the McCrary Sisters, we were overwhelmed with joy. Buddy is family to us. The first thing that Buddy did was give us 50 songs and asked us to pick 20, then from those, we narrowed it down to the 10 on the CD.”

Let’s Go eventually grew to include 16 solid gospel tracks with varying mood and aesthetics. Opening with the brief, a capella intro “Let’s Go,” the McCrary’s move on to the energetic drum, organ and guitar accompanied track “That’s Enough.”  Shifting to a contemplative mood on the third track, “By the Mark,” one gets a feel of traditional gospel accompanied by a sole guitar. The fourth track, an energetic arrangement of the spiritual “I John,” is also sparsely accompanied by guitar and percussion—including drum and tambourine—while the following track, “Dr. Watts,” has every feature of a lined out hymn.

“Fire” is a veritably fiery track with its hot drum rhythm and theme of Holy Spirit’s fire. Next is a wonderful arrangement of Rev. James Cleveland’s “Use Me Lord” with a triple meter, something that Horace Boyer would describe as a gospel waltz. “Don’t Let Nobody Turn You ‘Round,” a famous Civil Rights song originally released by and featuring the Fairfield Four, was probably included as an important way of underscoring the connection between the quartet and the McCrary Sisters, given that their father was instrumental to the revival of the Fairfield Four after a 30 years hiatus. “I Am Free” can best be described as a celebration of the freedom of the Christian in dance, what with its upbeat melodic and percussive rhythm!
In the tenth track, “Hold On,” the listener is treated to a very brief quasi-esoteric a capella interlude with the important admonition to patience since “everything will be alright.” The uncanny air thus unleashed is carried over to “Driving Your Mama Crazy,” which ends with a bright and brisk movement and the plea “Help me, Lord, help me!” The meditative mood returns with “I’d Rather Have Jesus” which opens with a solo voice. A sense of mystery ensues in the musical narration of the miraculous sourcing of water in the desert by Moses in “He Split the Rock,” appropriately accompanied by relentlessly pounding rhythms and rock guitars. This is followed by the short a capella track “Old Shoes,” a rather asymmetrical interpolation in the flow of gospel message and sound based on a traditional song popularized by the Fairfield Four.  The penultimate track, “Hold the Wind,” begins with a rather cathedral-like organ intro before the McCrarys enter in a sustained 4-part harmony, while an unidentified male soloist takes over the lead. The album wraps up with an a capella arrangement of the traditional song “Walk In the Light,” which summarizes the entire spiritual message of the album.

The McCrarys are obviously are proud of their roots and heritage. During an interview with Chuck Dauphin, Regina stated: “The greatest blessing is that we get to sing about who and what we believe in—our God. And we get to give honor to our father, the late Rev. Samuel H. McCrary, who was the glue that kept the Fairfield Four together until he passed away.” And Alfreda added, “It is an honor to be able to sing the music that we were raised on—the old landmark music—with my sisters. This music is giving honor and thanks to some that made the way for us.”