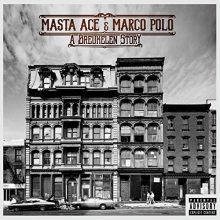 Brooklyn, hip hop’s locus, has nurtured some of the most legendary artists in the game. Many tributes have highlighted the borough’s significance, both to the genre and as a vital part of New York City. A Breukelen Story, Masta Ace and Marco Polo’s first official collaboration, manages to do just that and so much more.

The title pays tribute to Brooklyn’s origins as the American spin-off of Breukelen, its Dutch namesake, and much of the album’s content references landmarks within the American borough. But it’s the artists that grab the mic and weave the most compelling tales on this album. As any fan can tell you, the focus of Ace’s previous concept offerings such as Disposable Arts and A Long Hot Summer have traced his own induction into hip hop, while Polo has lent his production talents to numerous artists, including Talib Kweli and Royce da 5’9”.

A Breukelen Story, however, backspins in a new direction. Until now, little has been said about Polo’s introduction to hip hop production, only that he is a Canadian transplant from the early 2000s, and the performers he works with typically garner the most attention outside of the underground family. But as all true heads know, toasting is reserved for those who truly deserve the credit, and Ace gives his audience nods to both the area he grew up in and the producer who has successfully influenced so many. The album delivers 19 tracks interwoven with signature skits and interludes, working in tandem to frame the music while delivering the story of Polo’s record production pursuit.

The narrative grabs from the first track, aptly called “Kings,” with a regal tone and steady bass beats. Ace makes it clear who’s in charge—hip hop artists—and where they reign—Brooklyn. Polo’s story takes precedence from the next offering, which is a re-narrated conversation between him and his father called, “Dad’s Talk.” You can hear the concern in his dad’s voice over Polo’s decision to move from Canada to Brooklyn, while at the same time sensing the finality of Polo’s choice.

Soon after, the title track,“Breukelen ‘Brooklyn’” glides onto center stage, with Ace, Polo and Smif-N-Wessun in tow. This tune, quite literally, is one of the smoothest I’ve ever heard, with an expertly-produced video that presents the landscape of the borough in stunning visuals. While listening, my mind drifts back to the pounding bass of Nas’ 1992 “Halftime,” and I’m convinced “Breukelen ‘Brooklyn’” is of the same caliber. In addition, the song gives credit to the artists who reign there, both former and current.

From this point on, the album rolls Polo’s narratives one after the other, through which we learn his highs and lows in both his quest for hip hop legitimacy and his personal life realities. There are love songs to exes, such as “Still Love Her” featuring Pearl Gates, and there is what could arguably be a love tribute to Brooklyn in “You and I”: Like socks and a sweater/we should stick together. Hidden gems at the end of various tracks—such as “Get Shot” and “Man Law” featuring Styles P—give further insight into the reactions of Polo’s friends regarding his move and choices. Treasures simultaneously pushing the narration forward while pulling us back into Brooklyn’s past are found in the opening of tracks such as “Count Em Up” featuring Lil Fame (of M.O.P) and “God Bodies” featuring Trini Boy.

Ending with a skit with a congratulatory voice message from Polo’s mother, A Breukelen Story hits you right in the feels from start to finish. This album is not to be missed, and even better, it’s truly a King-sized toast to all that gives hip hop its soul, its voice and its befitting status. Well done, Masta Ace and Marco Polo. You’ve given us all, near and far, a deepened perception of Brooklyn Excellence.